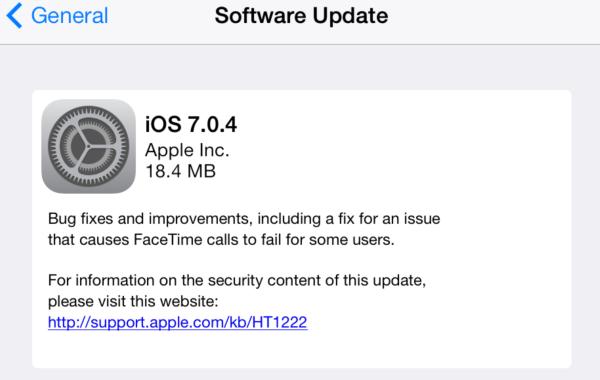 There has been a lot of news recently concerning a couple of firmware updates that have been pulled due to issues on the Android platform, but these types of bugs are not exclusive to Android as the iOS 7.0.4 problems continue as iOS 7.1 gets closer to release.

Soon after iOS 7.0.4 was released we reported on a couple of issues that were found but now problems have become more widespread with some issues continuing from the previous version of the mobile software.

It is being reported by GottaBe Mobile that a number of iPhone users are complaining about poor battery life along with other reports of having trouble connecting to a Wi-Fi network. Some users have been complaining that they can’t sign into their network despite entering the correct passwords, and this only become a problem since the latest iOS update.

As we reported previously the iPhone can be rather sluggish especially older models, and even the iPhone 5S is not immune from the problems as reports of random reboots have been reported on a number of units on different carriers.

This news comes as Apple has now sent out the first beta of iOS 7.1 to developers as the company looks to provide a solution to the bugs that have been affecting the software. There doesn’t seem to be any major changes with the operating system and hopefully it will address the problems that have been affecting users without creating any new ones.

Have you had problems since downloading iOS 7.0.4?