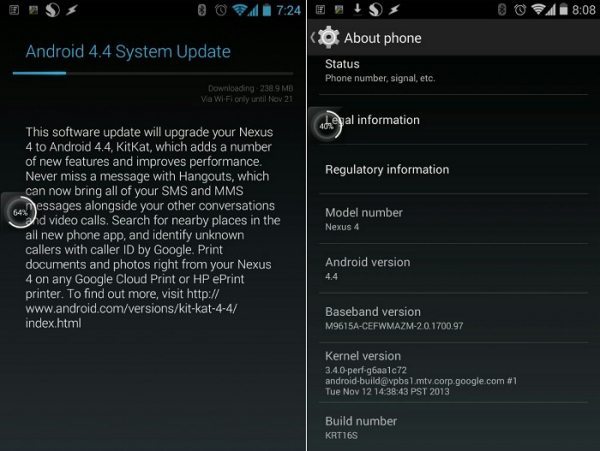 We already reported that the Nexus 7 and 10 tablets started receiving the Android 4.4 KitKat update, and now the latest news shows that the Nexus 4 has started to receive the new update.

The Nexus 4 Android 4.4 KitKat update surfaces slowly and not everyone is lucky enough to have received it yet, Google has started to roll out the new KRT16S KitKat update to the Nexus 4 smartphone OTA.

There have been a few reports from Nexus 4 owners saying they have it installed, but we have had no official announcement by Google as of yet.

Have you received your Nexus 4 Android 4.4 KitKat update yet?

The update is 240MB in size, new features and enhancements will be noticeable such as new Hangouts application with SMS and MMS integration, better performance, Google Cloud Print and so much more, this will work wonders on the older Nexus 4.

If you cannot see the Nexus 4 update just yet please do not worry, just twiddle your thumbs and go about your daily business. You should all know by now when updates are released they do so with a slow process and will reach all within time, just keep checking your notifications bar for the update or go and check manually now and then.