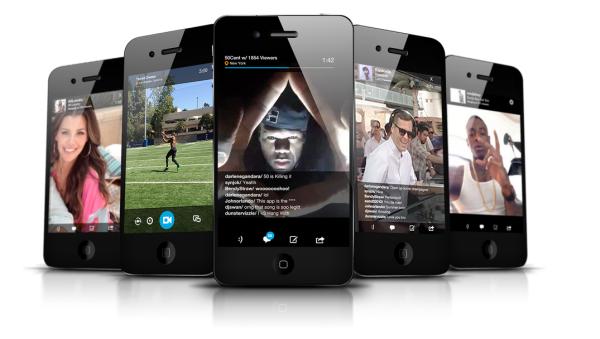 There are now numerous ways for owners of mobile devices to connect with others and the Hang w/ application that was originally released earlier this year has been steadily growing in popularity, and the iPhone app has seen an update that brings some nice extras with the Android version getting the same treatment soon.

The application is brought to you by MEDL Mobile and Hang w/ allows users to broadcast live video and connect with some famous celebrities, which includes the likes of 50 Cent who recently made an investment into the service and has promised exclusive content to be provided to other users.

It has often been called to be like Twitter but with video where users can set up their own video channels and gain their own followers. The iOS version of the app has recently received a major update that now allows users to stream live video from a mobile device straight to their Facebook wall.

These videos can then be viewed or shared by friends without the need of a mobile device, and will help increase the growth of this popular free application. The developer has steadily been improving the service since its initial release and other enhancements from this update include improved audio and video quality.

There is also deeper integration into Twitter along with the option of 3, 6, and 9 minute videos, and the pre-broadcast page has been streamlined along with an improved hamburger menu layout. There have also been some performance enhancements and a number of bug fixes, and the same update is currently in development for the Android version of the app. Hit the App Store or Google Play to download the application for free.

Have you given Hang w/ a try yet?