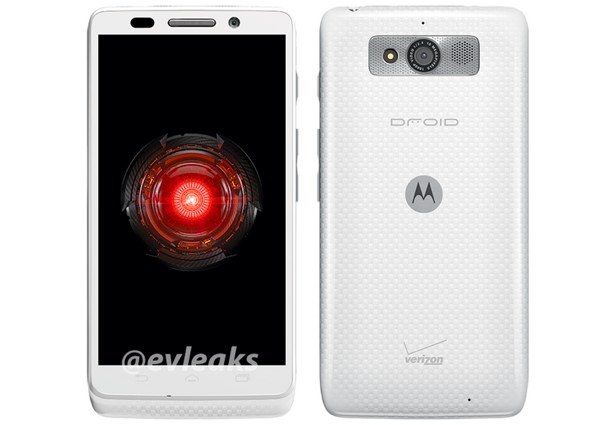 Just in time for the holidays we hear news of a new color option of Verizon’s Motorola Droid Mini. A fresh leaked image shows a Motorola Droid Mini white version on the way. As Motorola won’t miss the opportunity for holiday season sales we anticipate it will arrive soon.

Not long ago a red Motorola Droid Mini was also leaked, and recently an update containing improvements to the camera arrived for this device. There could be plenty of buyers for this phone in the weeks ahead and a white edition seems like a timely move on Motorola’s part.

The Droid Mini in white image comes from prolific leaker @evleaks, who is usually a very reliable source with this kind of information. Unfortunately there was no release date or pricing given, but when we hear more on that we’ll pass on the news.

Potential buyers might like to know that the Droid Mini that is eventually in line for the Android 4.4 KitKat update, as already confirmed by Motorola. That will also make this white version more appealing for some.

Specs include a 1.7GHz dual-core processor, 4.3-inch display with resolution of 1280 x 720 and 342 ppi, 2GB of RAM, and 16GB of internal storage (non-expandable). The Motorola Droid Mini also has a 10-megapixel rear camera and 2-megapixel front-facing camera, a 2000 mAh battery, and comes running Android 4.2.2 Jelly Bean.

Are you looking forward to seeing a white Motorola Droid Mini hit the shelves? Let us know with your comments.