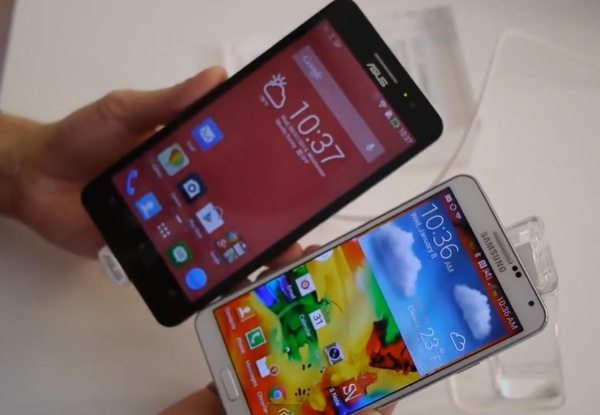 If you’re in the market for a new Android smartphone the chances are you already know plenty about the Samsung Galaxy Note 3. This is a phablet sized device but there are plenty of these larger new handsets coming to the market. Today we have a video to share that shows Samsung Galaxy Note 3 vs. Asus Zenfone 6 first impressions.

The Galaxy Note 3 is already widely available while the Zenfone 6 was recently made official and will release sometime in Q1. The first thing to note is that even though these both have large displays there is plenty of difference as far as specs are concerned.

The differences are understandable though as the Galaxy Note 3 is a top-end handset while the Asus Zenfone 6 will be an affordable low-cost handset. Nevertheless because of their size similarity and the fact that they are both Android devices there may be people making a choice between the two.

The YouTube video that we’ve embedded below this post gives an initial look at the Galaxy Note 3 vs Zenfone 6. It begins with a look at both devices side by side to show the designs and then discusses aspects such as the displays, differences in some of the specs, performance, batteries, cameras and more.

The video gives a useful brief outline of the Galaxy Note 3 and Zenfone 6 against each other and it will be interesting to see some in-depth looks and Zenfone 6 reviews when it becomes available. You might also be interested in our recent article about the Galaxy S4 vs Zenfone 5. In the meantime we’d be interested to hear your views on these two handsets.

Could you be tempted to the Asus Zenfone 6 with its lesser specs because it will have a very reasonable price tag (thought to be around $200)? Maybe you’d rather pay more to get the top-end experience of the Samsung Galaxy Note 3?