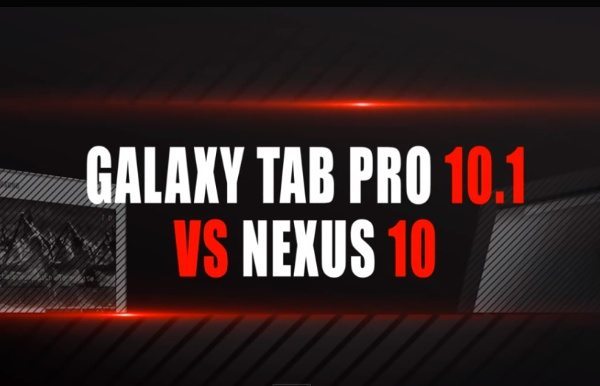 The Google Nexus 10 tablet released back in November 2012 and has been a popular tablet choice among Android device enthusiasts. Recently Samsung introduced some new Pro tablets, one of which was the Galaxy Tab Pro 10.1. Today we have a video to share of the Nexus 10 vs. Samsung Galaxy Tab Pro 10.1 that showcases the best points of each.

There are plenty of people eagerly waiting for the new Nexus 10 tablet to be announced but nothing has yet been made official. The current version of the Nexus 10 is powered by a 1.7GHz Exynos octa-core processor and has a 10.1-inch display with resolution of 2560 x 1600.

Meanwhile the Samsung Galaxy Tab Pro 10.1 is due to release at some point this quarter and features the Exynos 5 quad-core processor or Qualcomm Snapdragon 800 quad-core processor (WiFi or LTE version respectively). It has a 10.1-inch Super Clear LCD display with resolution of 2560 x 1600.

Further specs of the Galaxy Tab Pro 10.1 include 2GB of RAM and 16 or 32GB of internal storage (expandable via microSD to 64GB). It has an 8-megapixel rear camera, a 2-megapixel front-facing camera, and 8220 mAh battery. It will release running Android 4.4 KitKat.

The YouTube video that we have embedded below this article gives a look at the best aspects of the Nexus 10 and Galaxy Tab Pro 10.1. It begins with showing the plus points of the Galaxy Tab Pro 10.1 against the Nexus 10, with 12 aspects getting a mention. These include expandable storage, IR blaster, 60fps video, fast Wi-Fi ac, and more.

The video continues by showing the better points of the Nexus 10, such as the fact that it runs stock Android, has a larger battery, will be significantly cheaper, has front speakers and more. Seven points are listed in total but we won’t reveal them all here as you can check out the video for yourselves.

Another thing to remember is that we are still expecting the Nexus 10 2 to be unveiled soon, and that of course is likely to be far better competition for the Galaxy Tab Pro 10.1. You might also like to check out a comparison of the Nexus 7 2013 vs. new Samsung Galaxy Tab Pro 8.4.