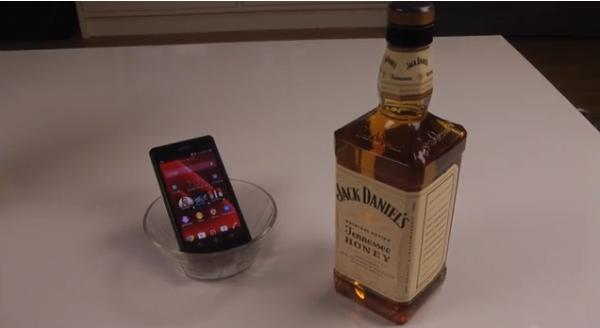 When a new smartphone model becomes available to consumers YouTube gets filled with numerous videos looking at the handsets, whether it is for reviews or drop tests. Sometimes though we see videos that are a little different and today the Sony Xperia Z1 Compact drinks some Jack Daniels.

The Sony Xperia Z1 Compact has recently been made available by the company as is the first true mini version of a flagship smartphone, and we have already provided you with videos looking at gameplay and reviewing the handset.

Below this article we have a video that sees the Sony Xperia Z1 Compact subjected to some Honey Jack Daniels, which many may think is a bit of a waste. Sony have been providing new smartphones with some level of dust and waterproofing over the last few months, but we now get to see how the device stands up to alcohol.

The reviewer has trouble actually opening the bottle of Jack Daniels to begin with, and results in him using his mouth in the end. He starts by pouring a little bit over the display that actually results in the device responding by trying to open up his emails before opening up the GTA game.

He tries to get the bourbon into the ports of the device but it continues to work, and is just a bit of fun but many may not like seeing so much waste of Jack Daniels.