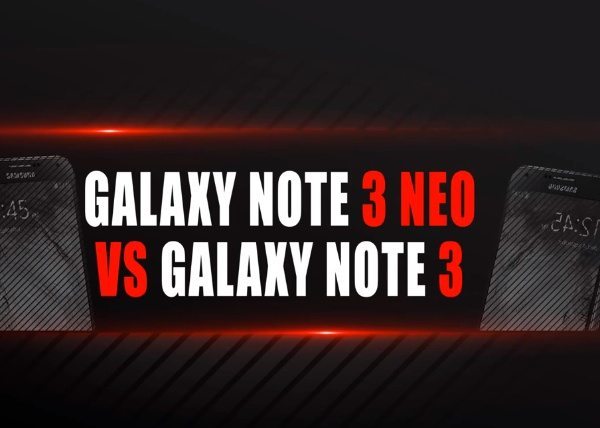 We’ve already given you the official specs of the Galaxy Note 3 Neo but as a brief refresher the key specs are a 1.7GHz quad-core processor for the LTE version or a hexa-core processor with dual 1.7GHz cores and four 1.3GHz cores for the non-LTE version.

Further specs include a 5.5-inch Super AMOLED display with resolution of 1280 x 720, 2GB of RAM, 16GB of expandable storage, 8-megapixel rear camera and 3100 mAh battery. It runs the Android 4.3 Jelly Bean operating system skinned with TouchWiz and also has use of the S Pen stylus.

Further specs include a 13-megapixel rear camera and 3200 mAh battery. It runs Android 4.3 Jelly Bean, upgradable to 4.4.2 KitKat with TouchWiz, and has the S Pen stylus.

While this gives a good idea of the main specs of these two handsets, the YouTube video below is a really good way of easily assessing the stronger points of each device other the other. The video begins with pointing out the benefits of the Galaxy Note 3 Neo with two aspects noted, which are that it is lighter and cheaper than the Note 3.

The video continues by looking at where the Galaxy Note 3 excels over the Note 3 Neo. As you might expect many more aspects are noted here including its 13-megapixel camera, Full HD display, extra RAM and much more. We won’t give all the details here as you might enjoy finding that out from the video.

At the end of the video the highlights of each handset are noted alongside each other although it has to be said that the list for the Note 3 Neo is pretty short compared to that of the Galaxy Note 3. At the time of the official launch Samsung didn’t confirm regional availability and pricing for the Galaxy Note 3 Neo. but since then we have seen some early price indicators that suggest it won’t be as cheap as we had expected.

The Galaxy Note 3 is widely available for various markets and carriers while the Note 3 Neo is expected to release at some point in February. When we hear more news on markets where it will release and pricing we’ll be sure to pass on that information.

From what you’ve seen and heard so far about the Samsung Galaxy Note 3 and Note 3 Neo, which would you be likely to choose? Let us know with your comments.