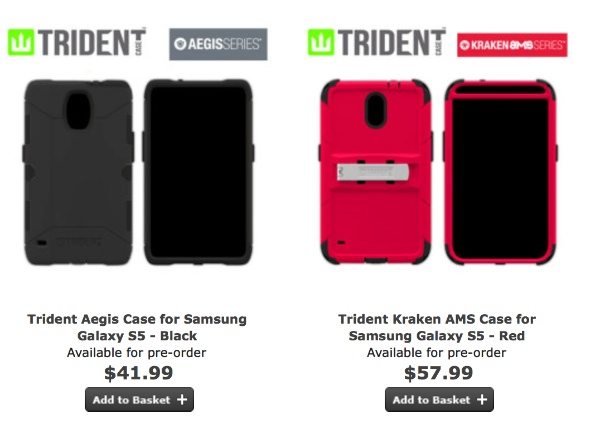 As we get closer to the official unveiling of the Samsung Galaxy S5 we’re hearing an increasing amount of leaks about the device, par for the course for significant new smartphones to the market. Now news about some Galaxy S5 cases accessories is causing some confusion as to whether the phone will have a fingerprint scanner or not.

There have been rumors for some time that the Galaxy S5 will feature a fingerprint sensor, to rival the Touch ID that Apple introduced on the iPhone 5S last year. Only yesterday we informed readers about a new report that Samsung could be using a swipe fingerprint scanner system on the S5 screen.

Many cases feature cut-outs for access to controls and ports and these cases are pretty much what you’d expect, with the design catering for volume controls on the right and power on the left. Trident also confirms access via cut-outs for microphone, loudspeaker, flash unit and camera. However fingerprint scanner access is not mentioned at all.

This has led to plenty of discussion and doubts that a fingerprint scanner is coming to the phone at all. However, it’s just too early to know. The case manufacturer may have deliberately left this detail out of the description or the sensor could be embedded on the front of the handset so let’s not jump to any conclusions here.

Some believe this throws a spanner in the works as accessories for the Galaxy S5 begin to come to light, there is a new accessory website that has two cases for the Galaxy S5 listed, the Trident Aegis and Trident Kraken, but it does not matter if there are cut-outs or not for the scanner. But, as we reported yesterday it is now claimed to be on the display so it doesn’t matter what the case is like.

For those interested in these cases the Kraken case comes in red, blue, black or green color options and is priced at Â£34.99/$57.99 while the Aegis case for Galaxy S5 comes in the same choices of colors with a price tag of Â£24.99/$41.99. They are available to pre-order now. You can see more about these cases at Mobile Fun.

It would be interesting to hear what readers think about a possible fingerprint scanner for the Samsung Galaxy S5. Do you think these cases throw doubt on the prospect or do you agree that it’s all speculation at this point? Is a fingerprint scanner a deal breaker for you for the Galaxy S5?

One thought on “Galaxy S5 case accessories cause scanner confusion”