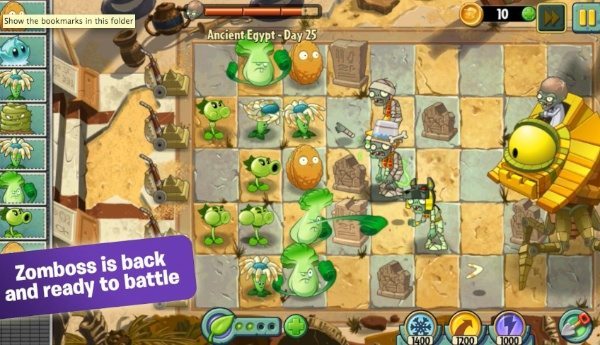 Plants vs. Zombies 2 is a hugely popular game and if you’re a fan you may already have noticed a new update that arrived yesterday on Google Play and the App Store. The Plants vs. Zombies 2 Android and iOS apps have both been updated to offer some new content.

This action-strategy adventure game will see you joining Crazy Dave in a bid to defeat hordes of zombies. The app gets extremely high ratings from users and it will be interesting to hear how the update goes down.

The Android version of the game has just been updated to version 1.9.271092 and brings the return of an “old friend’ as well as a new power-up. Dr. Zomboss the brains behind the invasion of the zombies is on the scene in a brand new Ancient Egypt level. The app description makes it clear that he’ll be heading to other time periods in the near future.

As well as this there’s a new Snowball power to chill the zombies. You can find the Android Plants vs. Zombies 2 app at Google Play. It’s compatible with device running Android 2.3 or later and this is a free app with in-app purchases available.

Meanwhile the iOS Plants vs. Zombies 2 app has been updated to version 1.9.271088. It offers the same new features as the Android app and you can find it at iTunes here. It’s compatible with iPhone, iPod touch and iPad running iOS 5.1 or later.

Are you a fan of the Plants vs. Zombies 2 game on Android or iOS? What are your thoughts on what the new update brings to the game? Let us have your comments on this.