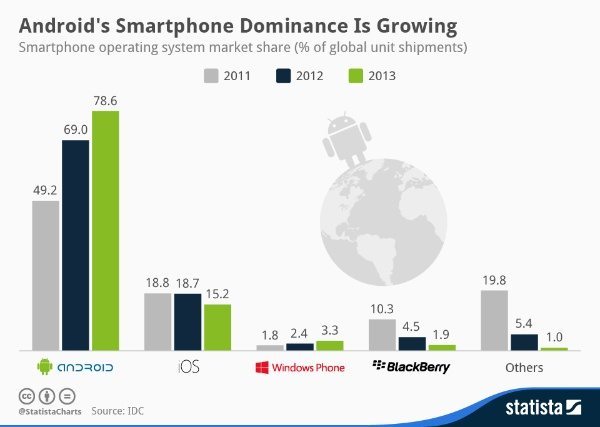 One subject that we often find sparks an influx of comments from Phones Review readers is the Android vs. iOS debate. Fans of devices using each operating system can be pretty passionate about which platform they favor. However, the latest figures show that Android smartphones rule the world, as the dominance of the platform grows further.

A market intelligence firm has just gathered the latest data for the mobile market and Android very clearly takes top spot in smartphone operating system market share. In 2012 Android devices made up 69% of global smartphone unit shipments and this increased further to a massive 78.6% for 2013. Compare this to the 49.2% figure for 2011 and that’s a substantial rise.

However, the iOS platform market share for smartphones fell to 15.2% in 2013, as opposed to 18.7% in 2012. This might surprise many people as the iPhone is so popular, but its success is more evident in some regions than others.

Of course others would point out that there are a huge variety of Android smartphones available when compared to iPhones. Nevertheless the fact remains that Android devices globally are most popular, and that their dominance is still gathering pace.

BlackBerry’s share of the market also fell, with BlackBerry 10 failing to rejuvenate the platform as had been hoped. In 2011 the BlackBerry platform smartphone market share was 10.3% but this fell to 4.5% in 2012 and dropped further still to just 1.9% in 2013.

The smartphone operating system market share for Windows Phone handsets rose slightly. The figure in 2011 was 1.8% and in 2012 this rose slightly to 2.4% and for 2013 to 3.3%. Not a substantial gain, but a rise all the same. You can check out the image below from Statista for all of the figures.

At Phones Review we encourage the healthy competition offered by having a variety of smartphone operating platforms to choose from, and the team uses a range of devices on different platforms. However, this seems to be irrefutable evidence that Android reigns supreme and it’s difficult to see this changing, certainly within the next few years.

We really welcome your comments on this, as we’re always interested to hear what you have to say. Which platform is your choice of smartphone operating system? Are you surprised at just how far Android is stretching away from the rest of the competition?