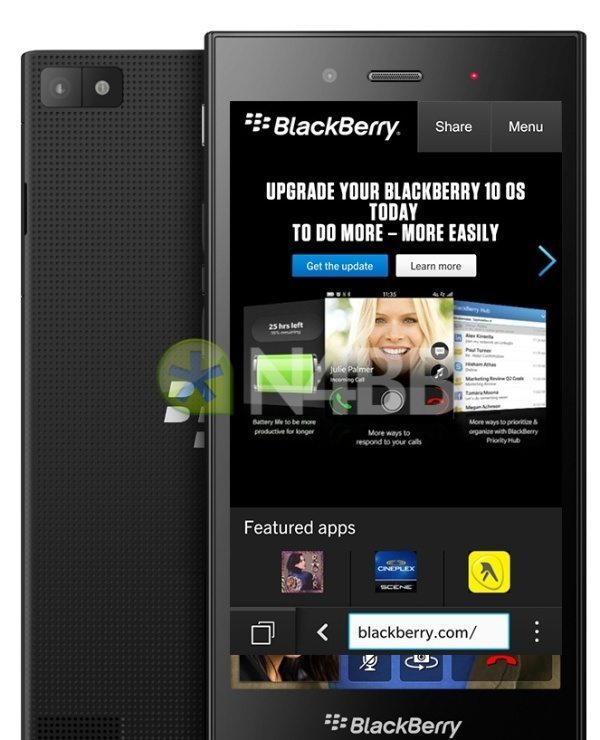 A new smartphone is on the way to the BlackBerry line-up in the shape of the BlackBerry Z3. This has a premium look but will be an affordable handset, and now BlackBerry Z3 specs and images have leaked before the official unveiling.

The Z3 (dubbed Jakarta) is the result of collaboration between BlackBerry and Foxconn to come up with affordable devices running the BlackBerry 10 OS. Some leaked press shots have emerged that show some nice styling for this phone with a fine pattern on the reverse.

The entry-level all-touch phone is expected to be officially introduced at MWC 2014 later this month and the Z3 is aimed at emerging markets. The BlackBerry Z3 price is speculated to be from around $150 or Rs. 10,000 for India, but we should point out that nothing has been confirmed about this at the moment.

Some of the phone’s specs have also been leaked and these include a 1.2GHz dual-core processor, 5-inch qHD display with resolution of 960 x 540, 1.5GB of RAM and 8GB of internal storage. Further unofficial specs include a 5-megapixel rear camera with autofocus, LED flash and 5x digital zoom, as well as a 1.1-megapixel front-facing unit.

The phone is juiced with a 2650 mAh battery and of course runs BB10. It’s also likely that the BlackBerry Z3 will have a 3.5mm audio jack, 3G, Wi-Fi, Bluetooth, and GPS.

It’s not too long now until Mobile World Congress when we should hear all of the confirmed specs, price and hopefully launch date for this upcoming BlackBerry smartphone. We’ll bring you more on this as we hear it.

Does the BlackBerry Z3 sound like a smartphone you might consider buying? Let us know with your comments.