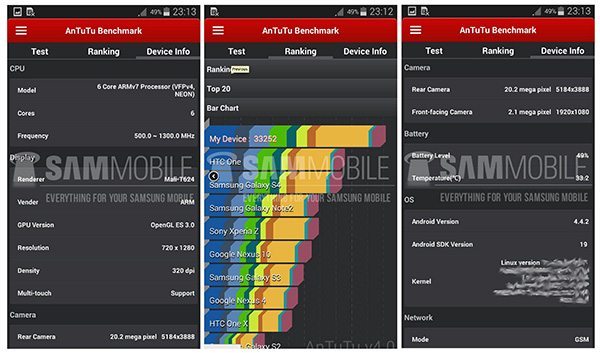 Only yesterday we got a look at the back of the Samsung Galaxy S5 Zoom. And today we have another leak, this time in the form of a benchmark run on the Antutu benchmark application.

According to the leak the S5 Zoom will come under theÂ model number SM-C115, we know that the main focus on this device will be the camera and it seems as though the sensor will be a rather mammoth 20.2MP in size, on the front we should be seeing a rather normal 2.1MP sensor. It does look as though the main camera will come with optical image stabilisation (OIS) and also pack in a 10x optical zoom includingÂ Xenon Flash.

The rest of the main specifications are that theÂ display will be 4.8 inches and use SuperAMOLED HD technology with a resolution ofÂ 1280Ã—720. Under the hood is Samsung’sÂ Exynos 5 processor that has six cores, 2gb of ram and also come with microSD card support, let’s not forget that it will also ship with the very tasty Android 4.4.2 KitKat out of the box.

Sounds pretty impressive but until Samsung official announce anything we are still in the dark, even if this does help just a little.

Will you be waiting for the Galaxy S5 Zoom?