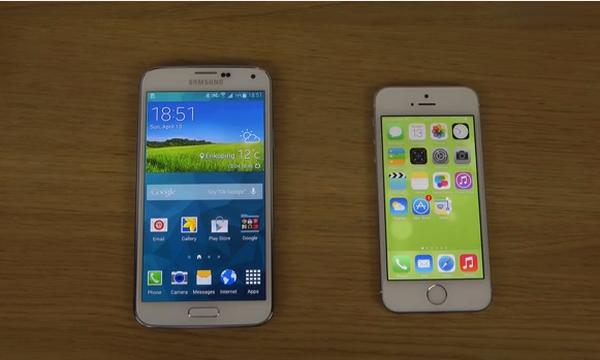 Away from the two companies various court battles there has always been a lot of arguments between owners of Samsung and Apple devices about who has the best smartphone. Today we have a Samsung Galaxy S5 vs. iPhone 5S iOS 7.1 Internet speed test video for your viewing pleasure.

We have already seen one speed test comparison between these two smartphones, but today’s one is simply concentrating on the two handsets performance with regards to Internet speeds. The YouTube video is just over 3 minutes long and begins by showing us the relative versions of operating systems that are in use.

This is obviously Android 4.4.2 KitKat and iOS 7.1 and we also get shown that both handsets are connected to the same Wi-Fi network. The test begins by using the iPhone 5S before moving onto the Galaxy S5.

The two handsets are then tested side by side at the same time but we won’t spoil the outcome for you.