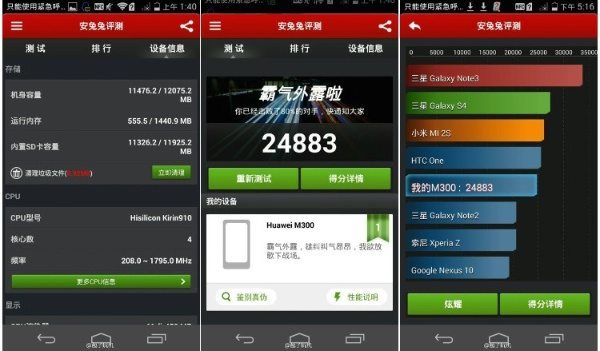 We’ve been seeing leaks about the upcoming Huawei Ascend P7 flagship for some time now and have already given readers some unconfirmed specs for the smartphone. Now a Huawei Ascend P7 pre-release benchmark has proved disappointing.

The launch of the Ascend P7 will take place at an event on May 7th and there are high expectations for this handset. Although some recent AnTuTu benchmarks for other new high-end smartphones have given impressive results, it’s reported that the same cannot be said for the Ascend P7.

The Kirin 910 quad-core processor for the Ascend P7 attained a score of less than 25,000, not at the level many would have hoped for. The AnTuTu benchmark does confirm some of the previously rumored specs of the device though, and these include a display resolution of 1920 x 1080, 2GB of RAM, a 13-megapixel rear camera, and 8-megapixel front-facing camera.

The Ascend P7 will be running Android 4.4.2 KitKat on release, but the AnTuTu benchmark is likely to be a bit of a let down for some potential buyers. However, Phone Arena points out that by the time the phone becomes available there could be further optimizations and so the benchmark score could be improved.

We have our fingers crossed that this is the case! Are you disappointed by this AnTuTu score for the Huawei Ascend P7?