Acer Iconia Tab 7 and Iconia One 7 availability and price 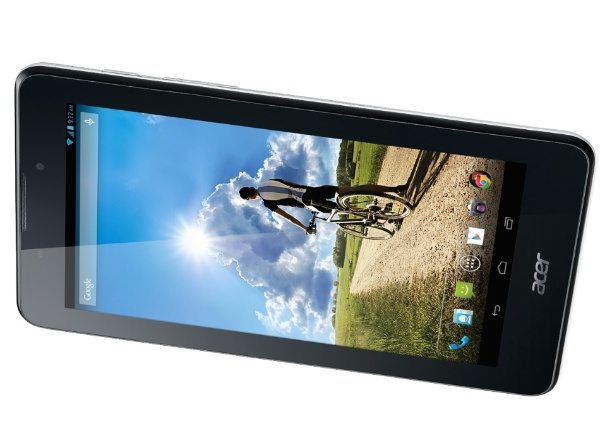 Two new reasonably priced Android devices from Acer have been made official today. The Acer Iconia Tab 7 and Iconia One 7 will both release in May in various world regions, and we have some specs, price and availability details ahead.

The Iconia Tab 7 is the more expensive of the two and features phone functionality and 3G. Specs include a quad-core processor (details unspecified), a 7-inch IPS display with resolution of 1280 x 800, rear and front-facing cameras, microSD card slot, and battery life of up to 6 hours.

The Tab 7 (pictured below) will be running the Android 4.4 KitKat operating system and will arrive in Europe, Middle East and Africa from mid-May at a price of approximately â‚¬149. It will also reach Latin America from June but it looks as though it won’t be available in the US.

Next we have details of the Acer Iconia One 7 and this has a 1.6GHz Intel Atom Z2560 dual-core processor, a 7-inch LED-backlit IPS display with resolution of 1280 x 800, 1GB of RAM, microSD support, 5-megapixel rear camera and also a front-facing camera. The battery life will last up to 7 hours and although it will release running Android 4.2 it will be updated to Android 4.4 KitKat in the future.

The One 7 comes in black, blue, pink, red or white colour options, and it will arrive from mid May at a price of around â‚¬139 for Europe, Middle East and Africa. This one will also be released at the end of June for North America, Central America and South America with a price of around $129.99.