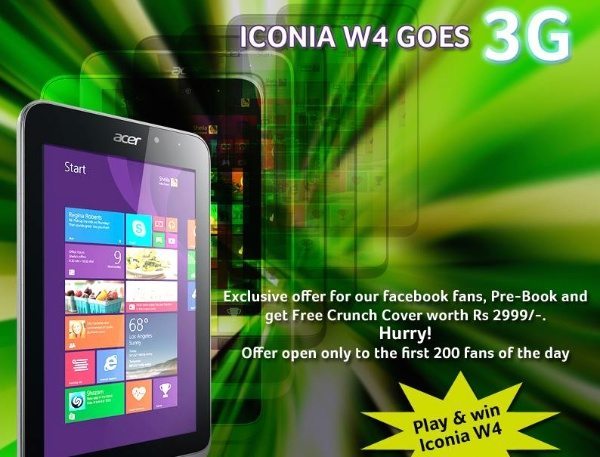 The Acer Iconia W4 3G tablet price has been announced at the launch of the device in India and it will cost Rs. 29,999. Many are likely to be pleased to see the arrival the 3G-enabled variant of the tablet following the popularity of the Wi-Fi version, and we have further details including specs ahead.

The Iconia W4 is a successor to the Iconia W3, and specs of the W4 include a 1.8GHz Intel Atom Bay Trail T quad-core processor, an 8-inch IPS display with resolution of 1280 x 800, and 2GB of RAM. It has a 5-megapixel rear camera with 1080p video capture, 2-megapixel front-facing camera, a 4960 mAh battery and runs Windows Phone 8.1.

Microsoft Office Home and Student 2013 are both pre-loaded on the Acer device and connectivity includes 3G (via SIM card), Wi-Fi 802.11 a/b/g/n, Bluetooth 4.0, microUSB and micro HDMI. There are only two more days to wait for availability, as the Iconia W4 3G will be sold from May 3.

If you’re interested in this tablet it’s worth pointing out that pre-orders placed via the Acer India Facebook page could receive a free crunch cover to the value of Rs. 2999. There’s also a chance to win the tablet. Do you think you will order the Acer Iconia W4 3G?