Nexus 5 vs Sony Xperia Z2 compared plus boot up test 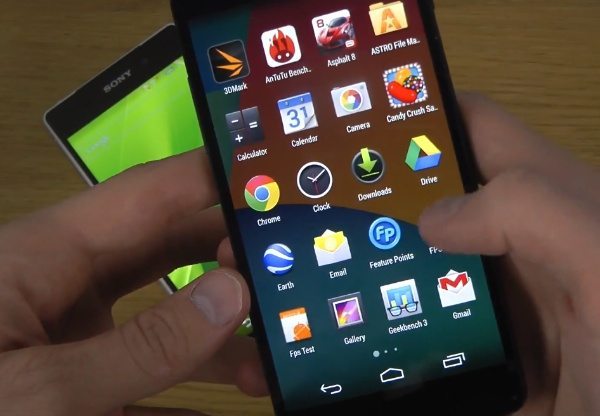 The Google Nexus 5 released late last year and has been a hugely successful smartphone, much admired by Android device enthusiasts. The Sony Xperia Z2 has recently released and is slowly arriving for sale in various countries of the world. Today we have a Nexus 5 vs. Sony Xperia Z2 comparison and also a boot up test on video.

We’ve already given a straightforward specs rundown of these two phones so if you want to check that out you can do at the above link. The first YouTube video that we have embedded beneath for your viewing pleasure shows what the LG-made Nexus 5 and Xperia Z2 have to offer and how they stand up against each other.

Both devices run the latest version of Android (although the Nexus 5 will get future updates quickest) and the video review begins by showing the two handsets alongside each other. It goes on to discuss aspects such as the display, the designs and builds, cameras, batteries, processors and more. It also mentions that there is a large price difference between the two, which could be a deciding factor for many potential buyers.

The second YouTube video below comes from the same reviewer and this time shows a boot up test between the Nexus 5 and Xperia Z2. It begins with showing that both handsets are running Android 4.4.2 before showing a basic boot-up speed look. There’s not a drastic difference although one is definitely quicker than the other, but we won’t spoil your enjoyment of the video by telling you the result here.

When you’ve checked out both videos we’re always interested to hear your thoughts. Do you think it’s worth paying more for the Sony Xperia Z2, or does the Nexus 5 offer everything you need and you prefer to have a stock Android experience?