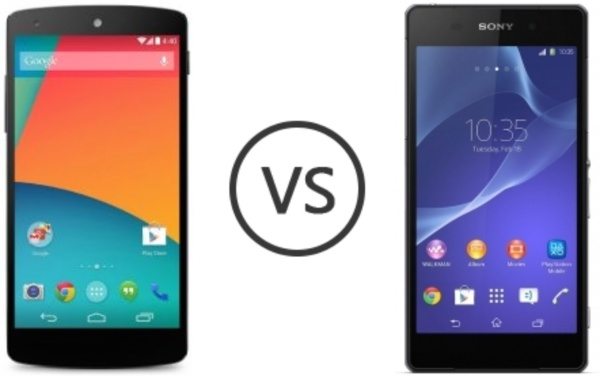 The LG-made Google Nexus 5 has been a big hit, with many choosing a Nexus handset because of the pure vanilla Android experience. It released in November last year but recently we’ve seen a plethora of new high-end flagships announced. Today we’re looking at the Nexus 5 vs. Sony Xperia Z2 in a specs breakdown.

It’s worth noting that the Xperia Z2 is likely to be popular with consumers but so far its limited release rollout has been a bit of a letdown, with the phone only arriving in some regions so far. Recently for example, it was reported that potential buyers of the phone in the US will only be able to purchase it unlocked direct from Sony, rather than on a carrier with subsidies, although at least it has been confirmed for an arrival in the summer. We’ll compare the key specs of each to see what they have to offer.

RAM and Storage
There’s 2GB of RAM for the Nexus 5 and it comes in internal storage options of 16 or 32GB (non-expandable). On the other hand the Xperia Z2 has 3GB of RAM and is a 16GB phone, expandable via microSD to 128GB.

This comparison doesn’t take into account all of the many features of these handsets or their builds, but it seems fair to say that on specs the Xperia Z2 has the measure of the Nexus 5. Just some of the benefits of the Xperia Z2 include more RAM, expandable storage, better camera capabilities, and a higher-capacity battery. The Z2 also has the advantage of being dustproof and water-resistant.

However, the Nexus 5 still has plenty to offer, and for many users nothing can beat a stock Android experience. It also has a cheaper price tag and the smaller form factor and lighter weight will also be preferred by some users. You might also like to check out recent comparisons of both of these phones with the new OnePlus One here and here. If you were to choose right now, would you opt for the Nexus 5 or the Sony Xperia Z2?

One thought on “Nexus 5 vs Sony Xperia Z2 specs breakdown”