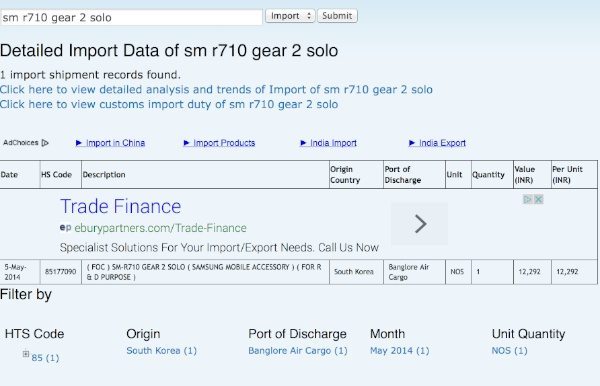 If you’re into wearable devices you will already know about the Samsung Gear 2 smartwatch that recently released, a successor to the original Galaxy Gear. Now it appears that earlier rumors about a standalone Gear 2 device could have been accurate as a Samsung Gear 2 Solo thought to have standalone calling has been spotted listed on an import site.

We informed readers in March about indications that a version of the Gear 2 was in the pipeline that would be a standalone mobile device. This would be enabled by a USIM (Universal Subscriber Identity Module) allowing the user to make calls directly from the watch with no need for another mobile device connection.

Now a device dubbed the Samsung Gear 2 Solo with model number SM-R710 has shown up on an import/export India website, and it looks likely that this could be the rumored standalone smart watch. It looks as though it’s still early days as only one unit is listed and this is for R & D purposes and has a value of Rs. 12,292, around $205 or Â£120. Remember though that this is not the retail price.

Earlier rumors suggest that the device will launch first in South Korea with a global release rolling out at some point afterwards. There’s no more information at this point but we’ll be keeping a close eye on further developments with the Samsung Gear 2 Solo. Do you like the idea of a Samsung smartwatch with standalone calling?