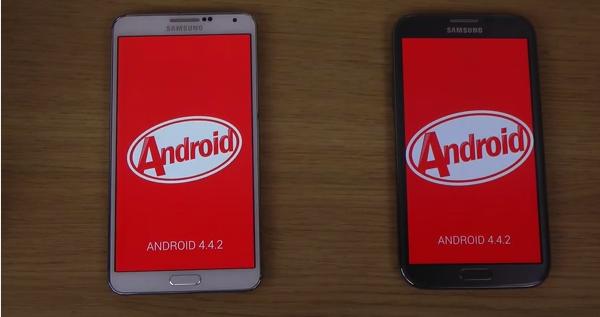 Each year we see smartphone manufacturers giving their handsets a refresh that often means some improved specifications and features. This can often include flagship devices and today we have the Samsung Galaxy Note 2 vs. Galaxy Note 3 running Android 4.4.2 KitKat in a speed test video.

The Samsung Galaxy Note 2 may be getting on a bit now but at least the device is being treated to the Android 4.4.2 KitKat update unlike some versions of the Galaxy S3. Today we have a short YouTube video that is looking at the boot up speed of the Note 2 against the latest Galaxy Note 3 with the two handsets running the latest version of Android KitKat.

Once the two devices have been shut down they are booted up again with a slight time difference but the video also gives a brief look at the differences in the TouchWiz UI.

Check out the video and tell us what you think of the handsets performance.