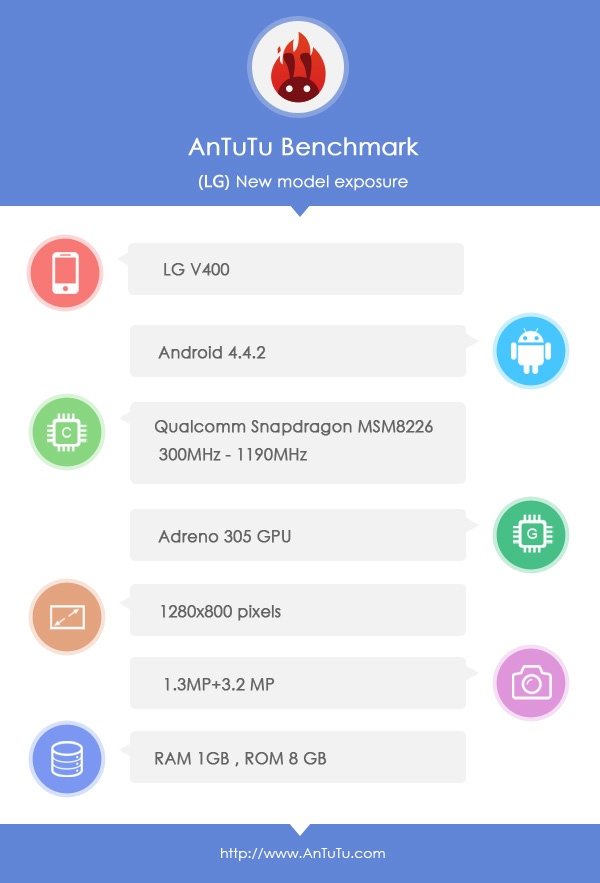 Two days ago we reported about some additions to the LG G Pad series, with three new sizes on the way, 7.0, 8.0 and 10.1. Now an LG G Pad 7.0 specs leak suggests the tablet will be an entry-level device with an affordable price.

The 7-inch tablet has made an appearance on the AnTuTu benchmark database as LG V400, which reveals that it has a 1.2GHz Snapdragon 400 quad-core processor, Adreno 305 graphics, display resolution of 1280 x 800, 1GB of RAM and 8GB of internal storage. There’s also a 3.2-megapixel rear camera and a 1.3-megapixel front-facing unit.

The tablet is running the Android 4.4.2 KitKat operating system, but there’s no indication on the battery capacity just yet. Hopefully, all of the above points to LG giving the G Pad 7 a reasonable price tag. It shouldn’t be too much longer until the specs are officially announced by LG, but on what we’ve heard so far what would you be willing to pay for the LG G Pad 7.0?