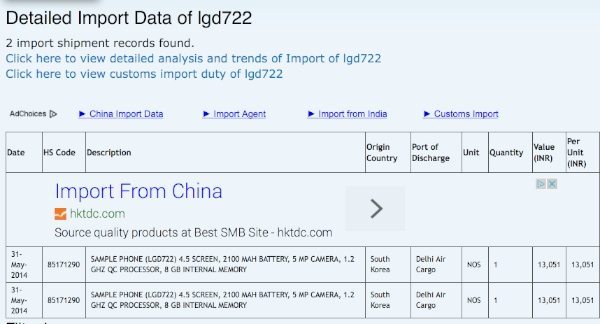 LG’s flagship smartphone in the form of the LG G3 is a new addition to the huge variety of handsets available. It’s about to be joined by the mini version if leaked documentation is anything to go by. We have news on some LG G3 Mini specs evidence from an import listing.

We first saw evidence of the G3 Mini back in April in another leaked document where it appeared as model number LG D725, which would be a variant for US carrier AT&T. Now the G3 Mini has appeared on an import site with a further model number, LG D722 (thought to be the model for European markets).

The documentation shows the device to have a 1.2GHz quad-core processor, 4.5-inch display, 8GB of internal memory, a 5-megapixel camera, and a 2100 mAh battery, although the earlier leak we saw suggested an 8-megapixel camera. We’ve seen leaked device news from the same site in India on numerous occasions now, which usually turns out to be accurate.

The G3 Mini is being imported for testing and evaluation, and going on past experience this usually implies that a release is not too far away. Are you hoping to see an official arrival of the LG G3 Mini soon?

Source: Zauba
Via: G for Games