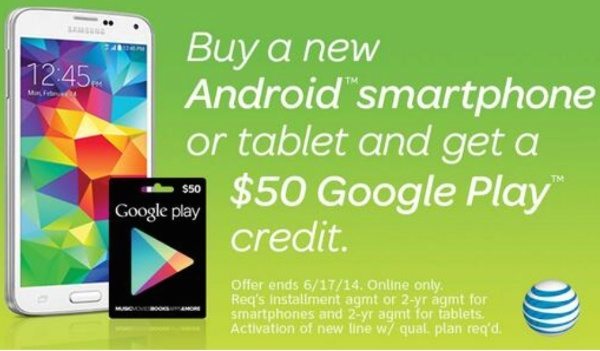 It’s always good to be able to bring readers news of incentives for buying a new smartphone or tablet, and today we can tell you about a new promotion from AT&T. The giant US carrier has a purchase deal that offers $50 Google Play credit for a limited time.

The offer is currently available for those who purchase an Android smartphone or tablet with a two-year agreement on a qualifying plan. AT&T announced the move on Twitter, and if you had intentions of buying a new device anyway then this is a nice bonus.

The offer only lasts until June 17th though, so if you’re going to make that purchase you should do it soon. You should also be aware that this is an online promotion only. Have you got your eye on a new Android smartphone or tablet from AT&T?