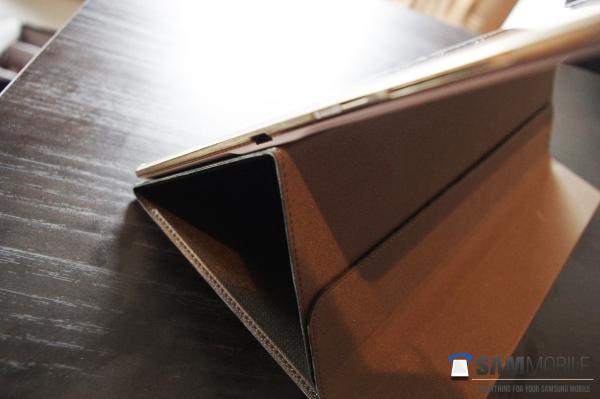 It is not unusual for us to see cases for mobile devices before the actual hardware has been officially launched and today some Samsung Galaxy Tab S accessories are seen before a release.

It was a few months ago that we first started to hear about the possibility of some new Samsung tablets that would use AMOLED displays instead of the LCD offerings it already has available, and some press renders recently appeared that provided us some details about the features of the upcoming new range.

Now some new Samsung Galaxy Tab S Flip Covers have appeared from a reliable source with a number of different images. The new range of tablet PCs from the company are set to offer mobile users displays with a resolution at 2560 x 1600 via Super AMOLED technology.

As we heard previously the new slates will come running a number of new software features that include the ability to take calls on the device via a synced Samsung Galaxy smartphone, which can be done while continuing with other tasks on the tablet.

There will also be a Remote PC mode as well as an Ultra Power Saving Mode with the unveiling event taking place in New York is set to be live streamed via the Samsung Mobile YouTube channel here.

Are you interested in the Samsung Galaxy Tab S range of devices?