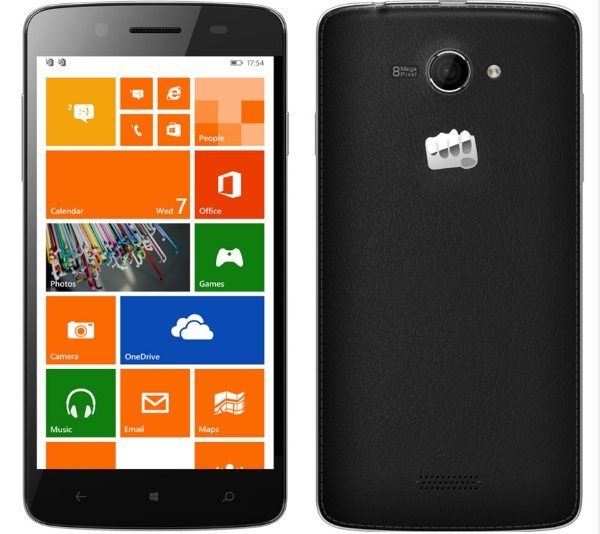 Micromax is a prolific manufacturer of mobile devices in India and two more smartphones have now been announced. Today we have details of the Micromax Canvas Win W121 and W092 price and specs from the official launch. Both phones are scheduled to be available across India at an unspecified release date in early July.

Micromax has partnered with Microsoft to come up with these new devices that both run the Windows Phone 8.1 operating system. The Canvas Win W121 specs mark it as the most premium of the two new phones, and include a 1.2GHz Qualcomm Snapdragon 200 quad-core processor, a 5-inch IPS display with HD resolution of 1280 x 720, 1GB of RAM, and 8GB of internal storage (expandable via microSD).

Further specs of this dual SIM phone (pictured below) are an 8-megapixel rear camera with LED flash, a 2-megapixel front-facing unit, and 2000 mAh battery. Connectivity options include 3G, Wi-Fi 802.11 b/g/n, Bluetooth and GPS. The handset features a leather finish rear panel and the price of the Canvas Win W121 is Rs. 9,500.

Moving on to the Micromax Canvas Win W092, this is the more affordable of the two as it’s priced at Rs. 6,500. Specs of this one include a 1.2GHz Qualcomm Snapdragon 200 quad-core processor, a 4-inch IPS display with resolution of 800 x 480, 1GB of RAM, and 8GB of internal storage, once again expandable via microSD. The dual SIM W092 also has a 5-megapixel rear camera with LED flash, a 0.3-megapixel front-facing camera, and 1500 mAh battery, and has the same connectivity options as the Win W121 above.

The arrival of these new WP smartphones makes Micromax the first mobile phone brand in India to produce phones on both the Android and Windows Phone platforms. The new Micromax Windows Phone handsets will be competition for the popular Nokia Windows Phone devices in India, and the phones will also be available for other emerging markets.

What are your initial thoughts on these new Micromax Windows Phone handsets and the pricing for India? Do you think you might buy the Micromax Canvas Win W121 or Canvas Win W092? Drop us a comment using the box below to let us know.