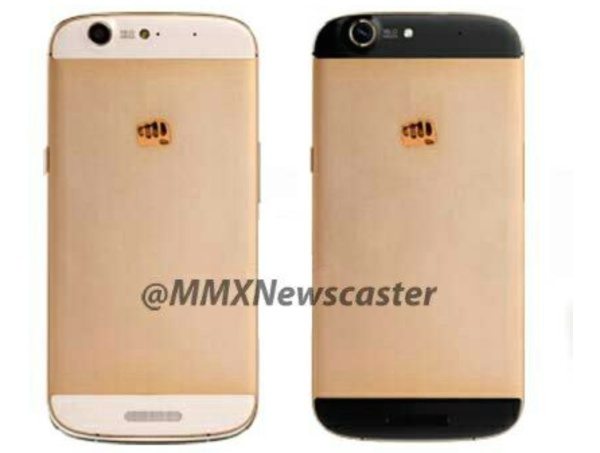 We’re seeing plenty of new Micromax smartphones being introduced lately and now a new one is on the cards in the form of the Canvas Gold A300. It looks as though this could be officially launched on June 16, as Micromax is holding a press conference on that day. We have Micromax Canvas Gold specs and image leaks to share today.

In the last week we’ve also seen details of two upcoming Micromax phones appear, the Unite A092 and the Micromax Canvas Entice, both aimed at the more affordable end of the market. The specs leaks for the Canvas Gold hint at something more enticing though.

As you might expect there’s a hint of the color options for the phone in the name, as it will be available in either Black Gold or White Gold, as shown in the leaked image in this article. Unconfirmed specs for the Canvas Gold include an unnamed 2GHz octa-core processor, although it’s likely to be the MediaTek MT6592 chipset.

Other unofficial specs so far include a 5.5-inch Full HD display with resolution of 1920 x 1080, 2GB of RAM, and 32GB of internal storage. It’s also thought that it will have a 16-megapixel rear camera with LED flash, along with an 8-megapixel front-facing camera for selfie fans. Fortunately it looks as though the Micromax Canvas Gold will come running Android 4.4.2 KitKat out of the box, and the phone will support 3G, WiFi 802.11 b/g/n, Bluetooth and GPS.

The phone is said to have an extremely slim metal build at just 6.9mm thick, something likely to appeal to many potential buyers. We’re hoping that the rumors of an official June 16 unveiling are accurate, and we may also see the recently leaked unnamed Micromax Windows Phone 8.1 handset made official at the same time. This is thought to have a Snapdragon 800 processor, a 5-inch Full HD display, 2GB of RAM, and a 13-megapixel rear camera.