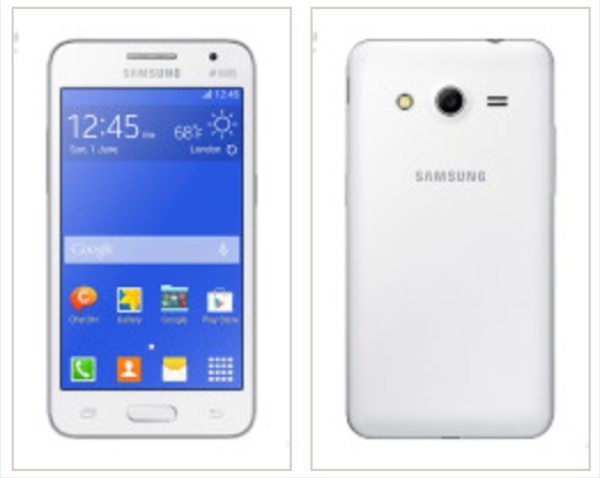 In April we reported some early details of the Galaxy Core 2 and this new leaks adds to that, although some of the earlier information differs slightly. At that time it was thought that the phone would launch for Russia in May although that didn’t come about. The latest leak on the Galaxy Core 2 Duos suggests an affordable handset, as we would expect in this line.

Unconfirmed specs of this dual SIM device (pictured below) include a 1.2GHz quad-core processor, a 4.5-inch WVGA display with 207 ppi, 768MB of RAM, and 4GB of internal storage (expandable via microSD). Further Core 2 Duos specs include a 5-megapixel rear camera with LED flash, a VGA front-facing camera, and a 2000 mAh battery, while connectivity includes 21Mbps 3G, Wi-Fi b/g/n, and Bluetooth 4.0.

It’s reported that quad-band 2G and dual-band 3G will feature for both SIM cards, so it’s likely that there will only be 3G connectivity for one card. The phone is said to have dimensions of 130.2mm x 67.9mm x 9.8mm, weighing in at 138g and running the Android 4.4.2 KitKat operating system.

Moving on to the leaked Samsung Galaxy Pocket 2, we first saw this mentioned back in February in some benchmarks of upcoming Samsung devices. The Pocket 2 is described as an entry-level dual SIM device. Specs include a 1GHz single-core processor, a 3.2-inch QVGA display, 512MB of RAM, and 4GB of internal storage, expandable via microSD.

These phones may be unofficial at this point in time but are both listed as ‘coming soon’ on the website source. However, there’s no mention of a price for either. For now we should remember that this is unconfirmed information, nevertheless it does tally largely with previous leaks. Are you interested in finding out more about the Samsung Galaxy Core 2 or the Galaxy Pocket 2?