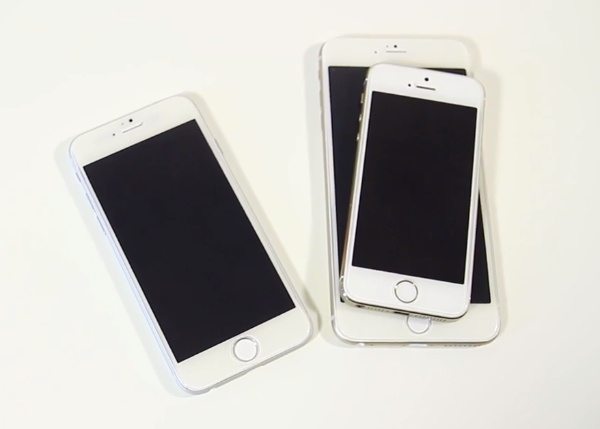 News and leaks on the iPhone 6 is steadily flooding in now, and we’ve now seen plenty of dummy models and also images claiming to be of the real deal. Today we have iPhone 6 latest news and a video, as well as further iWatch details.

Just in the last few days we’ve shown images from a very reliable source that purport to be the genuine iPhone 6 as well as a video showing details of price and specs of the device, which was rather less credible. One of the most widely believed rumors regarding the iPhone 6 is that it will be available in both a 4.7-inch display size with another larger phablet version at 5.5-inches. There has also been a lot of speculation about whether the iPhone 6 will feature sapphire glass displays.

The latest leaks from supply chain sources in Taiwan now say that the smaller 4.7-inch model will feature the standard kind of Gorilla Glass display while the larger 5.5-inch model will step up to a sapphire screen. There had previously been rumors about problems sourcing enough of the sapphire displays, and the sources now say that this is why around 10 million units of the larger version will be shipped while 60 million units of the smaller one have been ordered.

There are apparently plans to step up production of the 5.5-inch version once the sapphire display production has been mastered. A new YouTube video has also emerged that may interest some readers, and it can be viewed below this story. It comes from TechSmart and gives a 7-minute look at mockups of the iPhone 6 in both of the rumored sizes.

Many readers will also be interested in the Apple iWatch and although there was earlier speculation that it would arrive in September, it was more recently reported that the iWatch was headed for an October release. The newest reports now say that the iWatch as well as the two sizes of iPhone 6 will all launch together at the end of Q3. This ties in with an official unveiling of the three devices at the end of September, tallying with an expected release in October.

The same sources also reiterate the long-standing belief that there will be health and fitness features for the iWatch, not exactly a surprise as we already know about the health app in iOS 8, which is currently in beta stage. In two final snippets the sources give an expected price of $349 for the iWatch, and also say that a silver nanocoating for the device is being produced by TPK, one of the suppliers. However, at this stage it’s not clear what this nanocoating will offer to the iWatch.

We’ll remind you that none of the above is confirmed information and we expect to hear many more leaks between now and the eventual arrival of these devices. After you’ve checked out the video below we’d be interested to hear your thoughts. Are you looking forward to the arrival of the Apple iPhone 6 or the iWatch the most?