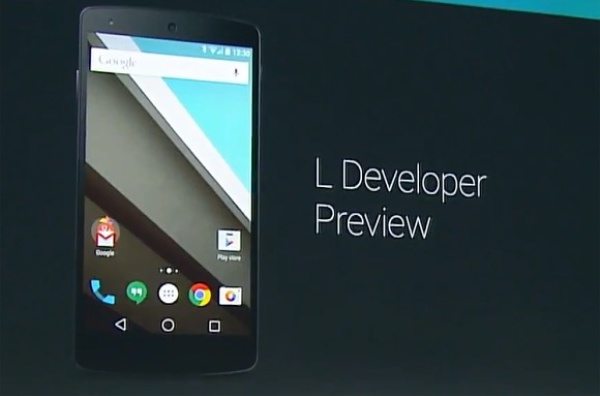 There has been plenty of news from the Google I/O keynote today including some details of the next major version of the platform. Android L will be made available as a developer preview tomorrow, offering some ideas of what it brings to the table, and if you want to know about the Android L release for end users, well that’s coming in the fall.

Yesterday we saw some early screenshots of Android L that showed an early glimpse, and now developers are treated to an early release to test and use for app optimization. The final name and version number of Android L has yet to be confirmed but some of the UI changes include a revamped dialer and status bar and refreshed system apps.

Transition animations also have a new look while notifications are now accessible on the lockscreen. If you want to be taken directly to the app you can tap a notification shown there, or alternatively decide to swipe it off. There are also upgrades for the Chrome browser with one of the changes enabling various bits of the UI to alter in size, giving the user simpler access to the options most relevant to them.

As well as this there are enhancements to performance and GUI rendering is now set at 60fps for smoother scrolling. ART is the new runtime environment for Android L rather than KitKat’s Dalvik. There’s more to add to the mix too, with Project Volta to improve battery performance and also a new Battery Saver mode.

A useful change is the ability for users to keep personal and work information separate and secure, without any modification needed for existing apps. This new feature will also be available for users of devices running Android 4.0 Ice Cream Sandwich or later. Another benefit is pulling fitness trackers into a single app dubbed Google Fit. This can access data from your smartphone, or other wearable technology devices.

Developers will be able to access factory images for the Android L beta for the Nexus 5 and 7 from tomorrow. Our early thoughts are that Android L is a significant update, and we’ll be bringing more news on this over the coming days, weeks and months. You can see a YouTube video below this story of the so-called “Material Design” from Google Developers. What are your initial impressions of Android L?