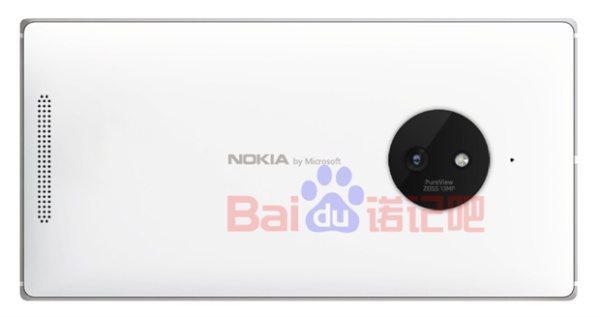 We’ve already seen some leaks regarding the Nokia Lumia 830, a successor to the popular Lumia 820. Today we have a new Nokia Lumia 830 render to share, and the interesting thing about this render is that instead of the usual Nokia logo, it bears “NOKIA by Microsoft” branding.

A couple of days ago we showed some leaked images purporting to be of an upcoming Windows Phone 8.1 device, widely thought to be the Lumia 830 or possibly the Lumia 730. Info gleaned from the image showed the device to have an aluminum frame, capacitive buttons rather than on-screen, a large camera housing, and what looks to be a polycarbonate reverse.

Now a leaked Lumia 830 render has shown up on China’s Baidu search engine, and following Microsoft’s acquisition of Nokia it was almost inevitable that we’d start to see signs of the purchase emerging. Indeed some people have even wondered if the Nokia branding would be dropped entirely and replaced simply with the Microsoft name.

For now though it looks as though Nokia is a name we’ll see around for at least a while longer, but followed by the words “by Microsoft.” Interestingly prolific and reliable leaker @evleaks also tipped recently that we would be seeing this branding.

The leaked Lumia 830 render we are showing here also shows a 13-megapixel rear Pureview camera unit sporting Carl Zeiss optics. It’s important to remember that none of the leaked images and specs we’ve seen so far are confirmed yet, although they are certainly plausible.

We’d be interested to know how you feel about this Nokia by Microsoft logo? Are you hoping that the Lumia 830 is made official soon? Drop us a comment using the box below.