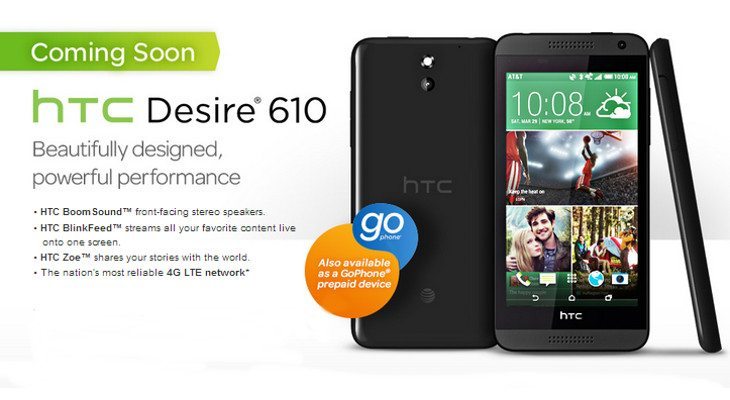 The HTC Desire 610 has already showed up in various parts of the world, and we talked about how the smartphone was headed to AT&T at the end of last month. The carrier made things official today, and the handset is quite a bit cheaper than previously thought.

HTC is no stranger to producing mid-range handsets, and the HTCÂ Desire 610 certainly fits the bill. The 610 will come with a 4.7-inch display, but don’t get too excited as the resolution is a paltry 540×960. Thankfully, things get better from there with a 1.2GHz quad-core Snapdragon 400, 1GB of RAM, an 8MP/1.3MP camera combo, and 8GB of (expandable) storage. A 2040mAh battery will keep the lights on, and we assume it’s removable like its Dual-SIM sibling.

The HTC Desire 610 isn’t going to knock your socks with the build quality, but it’s a clean looking device that should be available in a variety of colors. AT&T hasn’t confirmed those yet although black and white should be locks — other regions have seen gray, green, and red as well. As for the weight, the Desire 616 tips the scales at 143.5g and measures 143.1mm x 70.5mm x 9.6mm.

AT&T and HTC are putting the Desire 616 up for sale on July 25th, and the “Coming Soon” page is already live on Ma Bell’s site. As mentioned, the price is much cheaper than previously expected, as the HTC Desire 610 will only set you back $199 sans contract.