It wasn’t long ago that we we’re talking about the Ascend Mate 2, and comparing it to devices like the Galaxy Note 3. The comparisons were mild as the Mate 2 could only hang with the Note in the size department. That may not be the case with the Huawei Ascend Mate 3, a handset that’s just shown up on a benchmarking site.

To say the Huawei Ascend Mate 3 is better than the previous model would be a huge understatement if the specs posted on Weibo pan out. The device listed is the Huawei MT7-TL00, and it is an absolute monster. We’re not just talking about the screen size this time around either.

The Huawei Ascend Mate 3 specs will feature a HiSilicon Kirin 920 which is a speedy octa-core chip with four A15’s and four A7’s. The graphics will see a significant boost as well thanks to the Mali-T634 GPU. The device is said to have 2-3GB of RAM, but there’s no mention of the internal storage. As for the display, it’s listed at 6.1-inches with a resolution of 1920 x 1080. 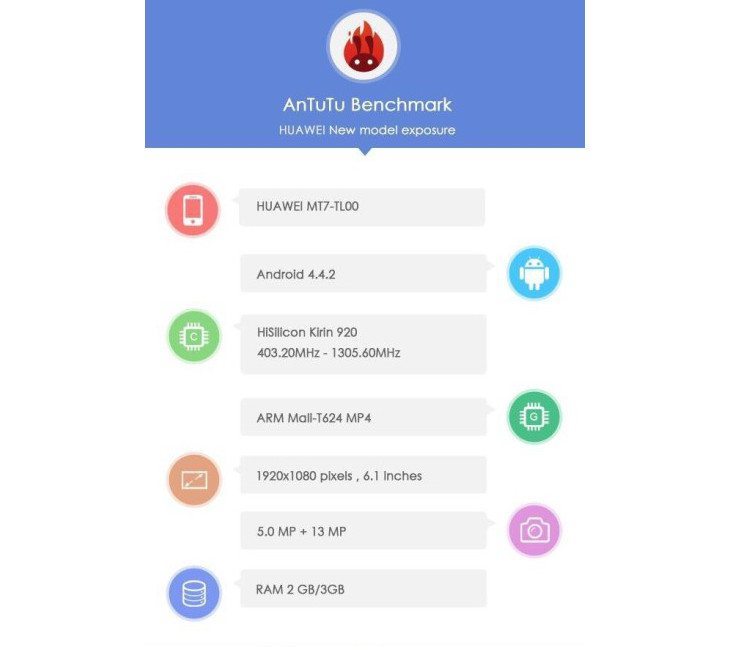 13MP has become the standard for rear cameras and the Huawei Ascend Mate 3 has one of those along with a sharp 5MP front-facing camera for selfies. No other specs are listed for the MT7-TL00, but it will be an Android handset running KitKat 4.4.2. A lot of the internals mentioned mimic those found in the Ascend Mate 2, but the processor and GPU are obviously getting an upgrade.

At this time little else is known about the Ascend Mate 3, aside from the fact that it’s said to have a full metal body. Pricing and availability are unknown, but we’ll fill you in as soon as we learn more about the Huawei Ascend Mate 3 specs.