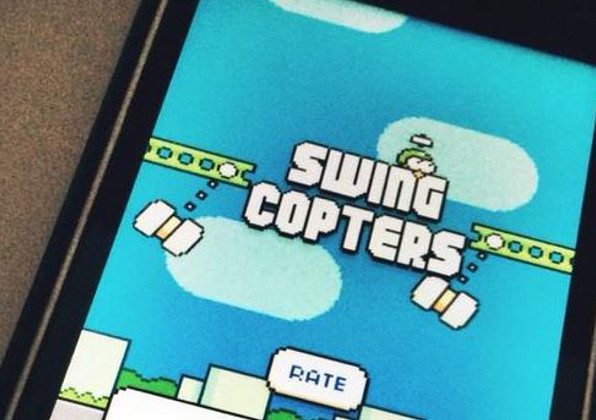 Swing Copters. The name may not ring a bell at the moment, but that’s all you’ll be thinking about after you pick up the game. The Swing Copters app is a new time waster from the creator of Flappy Bird, and your free time is going to take a big hit.

Dong Nguyen grabbed gamers attention with Flappy Bird, and as much as people enjoyed the game, it was pulled for various reasons including copycats and “addictiveness.” The developer has remained largely silent, until dropping Flappy Birds Family earlier this month, and now it looks like he has another game on the way with Swing Copters app.

My new game [Swing Copters] will be released on iOS and Android. pic.twitter.com/9ACbDxlzMN

Swing Copters is another one-tap game from Nguyen, and it appears to play just like Flappy Bird. That means you’ll tap the screen to avoid obstacles, but instead of going sideways, you’ll go up — just like a helicopter. There haven’t been many details released, but the game is going to frustrate you just like its predecessor.

Swing Copters is set for a release on iOS and Android on August 21st, and it will be free to download. If you want to kill the ads, it’ll set you back a buck, and there’s been no word on any other IAP’s within the game. As you’d expect, there will be clones (there are already a few), so be sure you download the real Swing Copters when it arrives and not a fake from a shady developer.

Are you excited to try out Swing Copters app or are you over the whole Flappy Bird craze?