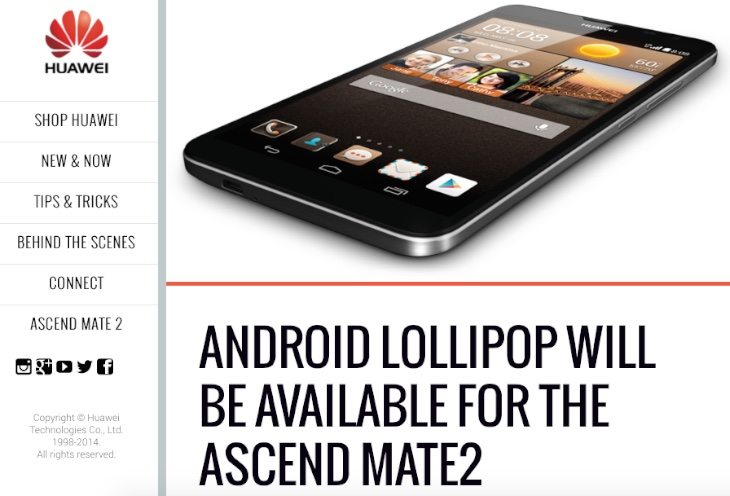 There’s some very pleasing news today for owners of the Huawei Ascend Mate 2. Previously Huawei stated that this handset would no longer receive future Android updates, and to say this created some consternation is an understatement. However, the company has now had a change of heart as the Huawei Ascend Mate 2 Android 5.0 Lollipop has now been confirmed for the phablet.

The Huawei Ascend Mate 2 has been a pretty popular device, and US buyers have been able to purchase the unlocked version of the phone. The previous announcement that the phone would not receive any more updates to its operating system version caused a real backlash among owners of the device, so it’s good to hear that Huawei has reversed that decision.

The phone launched on Android 4.3 Jelly Bean and hasn’t been upgraded to Android 4.4 KitKat, so in fact when the update is ready the device will skip straight to Android Lollipop. Although it’s good news to know that the phone will be treated to Lollipop, don’t hold your breath as far as a time is concerned.

Huawei has now said that the update is coming but only given a vague expectation of when it will arrive, saying this will be “in the first half of next year,” so it could still be more than six months away. Considering that some devices have already received 5.0 Lollipop (think Nexus, LG, Motorola), this could taint the news a little for some Ascend Mate 2 owners.

What will be really interesting here is whether Huawei will now beat Samsung to the mark with providing this update as a time has still not been confirmed for the flagship Samsung Galaxy S5 or Galaxy Note 4. If you’re the owner of a Huawei Ascend Mate 2 are you just happy that your device will receive Android Lollipop at some point, or a little frustrated that it could be some time off yet? Drop us a comment in the box below.