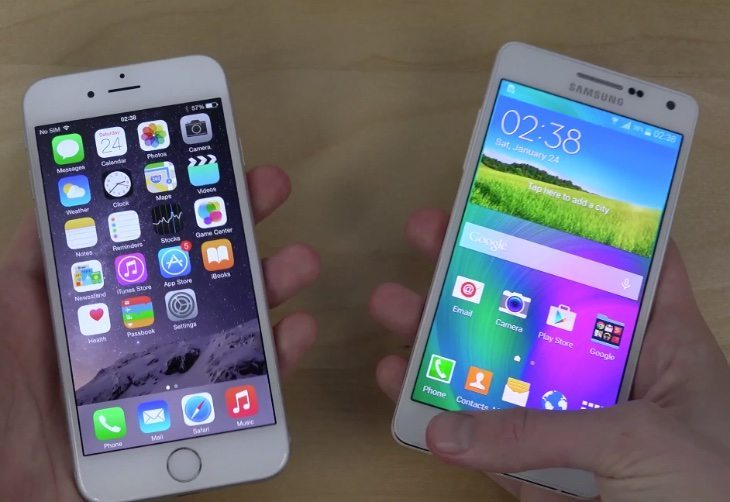 The iPhone 6 is of course an Apple flagship smartphone, a top-flight product with a price to match. On the other hand the Samsung Galaxy A5 released in December as a mid-range smartphone. It may not be as high-end a device as the Apple handset but it’s attracting plenty of attention, some of this due to its premium-looking metallic build. Today we thought it would be interesting to share an iPhone 6 vs. Samsung Galaxy A5 bootup speed test.

The iPhone 6 is equipped with a 1.4GHz Apple A8 dual-core processor, and users and tech experts alike will attest to its speedy performance. On the other hand the Samsung Galaxy A5 has a 1.2GHz Snapdragon 410 quad-core processor. Below this story we’ve embedded a YouTube video showing an informal speed test focusing on boot-up times.

At the beginning the reviewer is skeptical that the notably cheaper Galaxy A5 will be able to beat the iPhone 6 in this respect, so it’s interesting to see what unfolds. Firstly the handsets are checked to ensure that no apps are running in the background, and then they are both powered off. Both phones are then simultaneously powered on again to see which is ready for action first.

Although there’s not a great deal in it, it’s the lower priced Samsung Galaxy A5 that boots up first. The Samsung handset is running Android 4.4.4 KitKat while the iPhone 6 is running iOS 8.2 beta 4 (the latest public release is iOS 8.1.2). Because of this we will say that as this is a beta and not yet released to the public, this could have affected the results somewhat but it’s difficult to know how much.

The reviewer also gives a brief outline of the two phones noting the significant price difference between them and saying that both offer a quality feeling. If you have an interest in the Galaxy A5 you might also be interested in checking out our recent article of battery life testing on the A5 vs. Xiaomi Redmi Note 4G and Micromax Yu Yureka.

When you’ve watched the boot-up test video below we’d be interested to hear your thoughts. Are you surprised that the Samsung Galaxy A5 was faster in this test than the iPhone 6, or not? Send your comments to let us know.