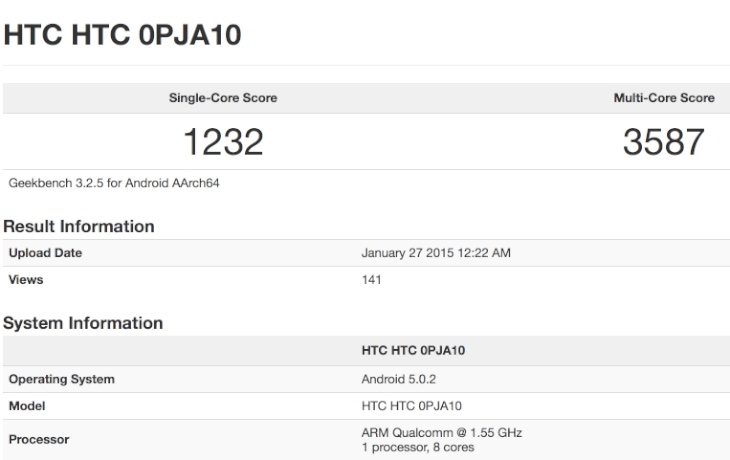 There’s immense interest in HTC’s upcoming flagship, and speculation and news about the One M9 continues to grow ahead of its expected unveiling at MWC 2015 in March. Now the HTC One M9 has made a benchmark appearance at Geekbench today, so read on for scores and more.

We’ve been hearing plenty about this device over the last few weeks, and just in the last few days there has been suggestion that some of the leaked images have been decoy units planted by HTC to throw newshounds off the scent. This was swiftly followed by another possible sighting of the phone being accidentally leaked by a company employee.

Now a device with model number OPJA10 has turned up on the Geekbench 3.0 database, and this is a number that has previously linked to the HTC One M9. The benchmark test shows the device to have a Qualcomm MSM8994 Snapdragon 810 octa-core processor and 3GB of RAM, tying in nicely with leaked specs so far, and it was running Android 5.0.2 Lollipop.

It’s anticipated that the big reveal of the HTC One M9 will take place at a special pre-MWC event on March 1. Therefore it shouldn’t be too much longer before all the speculation is over and we finally have confirmed specs and that all-important release date and more.

Have you been keeping tabs on news about the upcoming HTC One M9? If so, do you like what you’ve heard so far about this smartphone? Let us know with your comments.