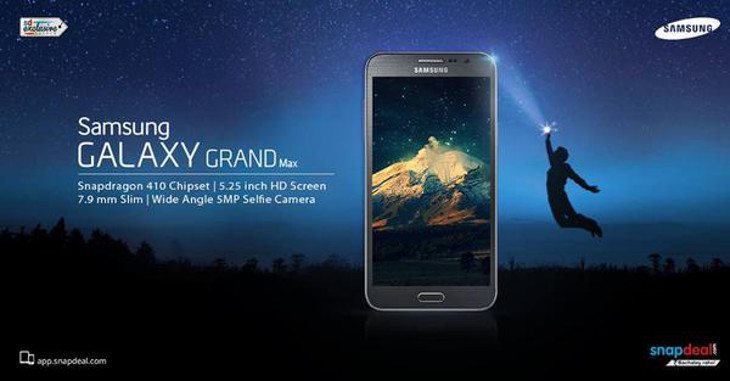 Samsung teased a new handset for India a few days back, and now we know the photo was tipping us off to the Galaxy Grand Max. While it’s not quite a flagship, the Galaxy Grand Max specs show it’s a capable handset that can run with similar smartphones in its range although the Samsung Galaxy Grand Max price of Rs. 17,286 may be a little higher than many had hoped.

The Galaxy Grand Max has a 5.25-inch panel with a resolution of 1,280 x 720p. The processor is listed as a 64-bit Snapdragon 410, which goes nicely with 1.5GB of RAM and 16GB of internal storage. Other specs to note include a 13MP rear camera, 5MP front-facing camera, microSD card slot, 4G LTE, and dual-SIM connectivity. The Grand Max will run Android 4.4.4 out of the box, and is powered by a 2,500mAh battery.

Samsung has been on a roll in India, and the Samsung Galaxy Grand Max is one of many new handsets set to arrive in the region within the next few months. Needless to say, customers will have a lot Â of smartphones to choose from in the coming weeks, and SnapdealÂ will be offering up at least one of them with the Galaxy Grand Max.

What do you think about the Samsung Galaxy Grand Max price and specs compared to similar smartphones in its range?