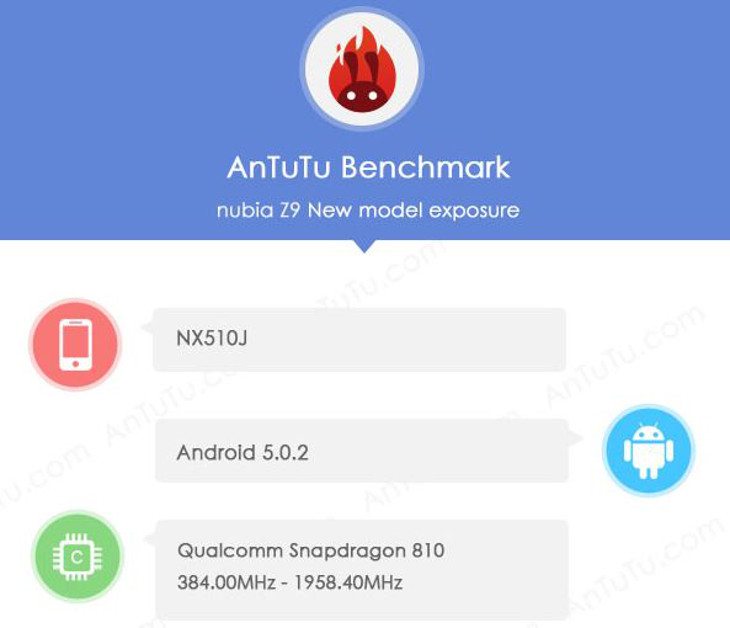 ZTE is set to unveil a new handset later this month, and all the teasers point towards the ZTE Nubia Z9. The smartphone is set to be the company’s next flagship, and it has just gotten benchmarked ahead of its unveiling on March 26.

Yesterday, ZTE rolled out a teaser to get folks excited about the upcoming ZTE Nubia Z9, but we didn’t have a lot to go on in terms of the specs. Some of the rumored specifications showed the smartphone to be high-powered, and now we can confirm those specs thanks to a new benchmark listing in AnTuTu’s database.

ZTE’s new smartphone is called the Nubia on AnTuTu and it carries the model number NX510J. The device sports a 5.2-inch FHD display with 3GB of RAM, and 32GB of internal storage. It will get its power from a Snapdragon 810 with an Adreno TM430 GPU, and is listed as running Android 5.0.2. It will also have a 16MP snapper on its backside to go along with an 8MP sensor on the front.

The ZTE Nubia Z9 specs are certainly flagship worthy, but the benchmarks don’t line up in a few areas when compared to the previous leaks. The panel is smaller than expected, and FHD is a far cry from the QHD display rumored to be in the works. Could the ZTE Nubia Z9 listed actually be the mini or a variant of sorts? We’ll find out in a few weeks when ZTE unveils the ZTE Nubia Z9.

One thought on “ZTE Nubia Z9 specs get benchmarked before launch”