Whenever we come across a phone with a big battery, we tend to show it some love as nobody likes carrying a brick in their pocket. The Lenovo P70 is one such device, and while it was announced for China, we hoped to see it roll out to other regions. Well, that’s happened today as the Lenovo P70 price in India has been announced along with the release date.

The Lenovo P70 price in India will be Rs. 15,999, which may seem a little pricey compared to comparable smartphones in the region. That said, those handsets don’t have massive batteries like the Lenovo P70 or the build quality Lenovo puts behind their devices. It also doesn’t hurt that it has quick charging, so you can charge the massive 4,000mAh battery up in around three hours. If you have juice to spare, you can also opt to charge another gadget.

As mentioned in our previous coverage, the Lenovo P70 rocks a MediaTek 64-bit chip clocked at 1.7GHz, and has 2GB of RAM to go along with 16GB of expandable storage. The 5-inch HD display will be easy on the eyes (and the battery), while the 13MP snapper will take care of your photographic needs. As everyone loves selfies, you’ll get a 5MP sensor on the front as well. Rounding things out are 4G LTE, Wi-Fi, Bluetooth, GPS, Dual-SIM compatibility, and Android 4.4. 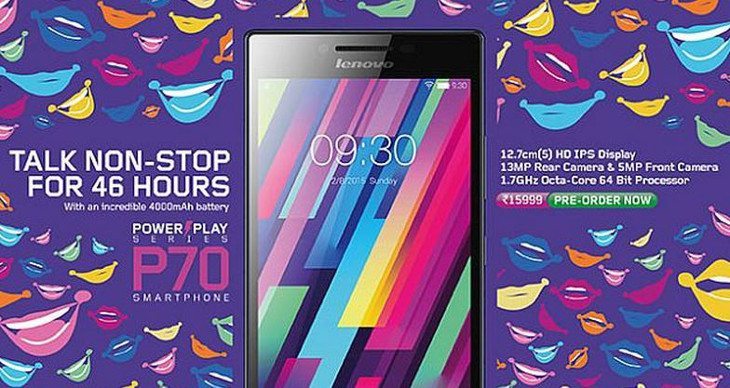 The Lenovo P70 is set to arrive through Lenovo’s online shop, and pre-orders are already live. The first batches are set to ship out on April 14th, and you’ll be able to pick one up in Midnight Blue.

What do you think about the Lenovo P70 price in India?