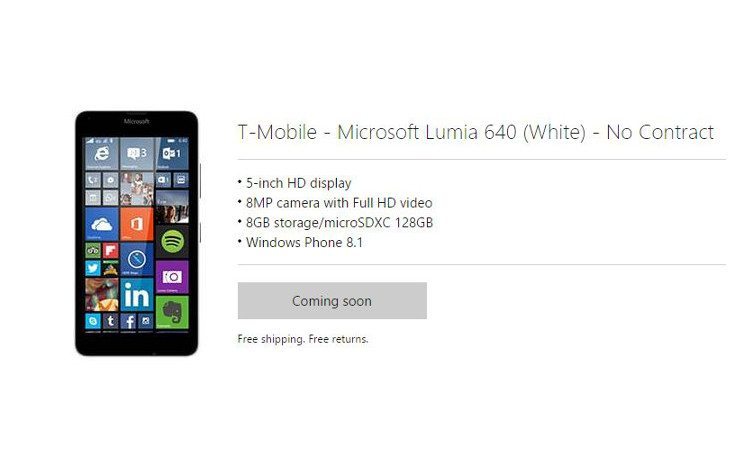 We spend a lot of time talking about high-powered Android handsets, but there are plenty of folks who enjoy the OS brought forth by the Windows phones. If you’re on Magenta and looking for a new low-priced Windows smartphone, today is your lucky day as the Lumia 640 price has just been listed online from Microsoft.

The Microsoft store has just listed the Lumia 640 online for T-Mobile off-contract. The Lumia 640 price is listed at $89, but you can’t actually purchase it at this time, so we’re just looking at a placeholder for the moment. That said, it’s coming soon so consumers in the states will be able to pick one up in the very near future.

As for the specs, the Lumia 640 is a mid-range handset, which means you’re looking at a 5-inch 720p display with a Snapdragon 400, and 1GB of RAM. There’s 8GB of expandable storage under the hood, and on the outside you’ll find an 8MP camera on the back to go along with a 0.9MP sensor on the front. Other features to note include Wi-Fi, Bluetooth, 4G LTE, a 2,500mAh battery, and Windows Phone 8.1 Lumia Denim update.

T-Mobile will be the first carrier in the states to stock the Lumia 640, and while we don’t have a release date, it’s expected to arrive soon. What do you think about the Lumia 640 price compared to its specs?