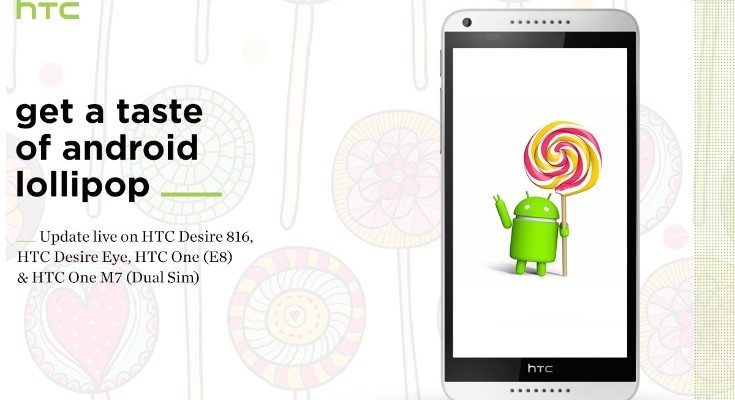 News on Lollipop updates is flooding in thick and fast at the moment, and only yesterday we reported that Android Lollipop was now arriving for the HTC Desire 816 in India. Now there’s further news as the company has issued news that the One M7 Dual SIM, One E8, and Desire Eye Lollipop updates are also now live for India.

HTC India posted on its official Facebook page to say, “Get a taste of Android Lollipop Update – live on HTC Desire 816, HTC Desire Eye, HTC One (E8), & HTC One M7 (Dual SIM).” Owners of these devices will notice plenty of improvements and changes with the Lollipop update, and as you might imagine the fact that it’s a major update means that it’s quite sizeable. The same update that has just arrived for the Desire 816 is 862.8MB in size, so you can expect something similar for each of the above devices.

Some users of these phones may have already received notification that the update is now available, especially those who have enabled automatic checking for updates. However, usually these software updates are rolled out in phases, so you may need to be patient. If you’re itching to get the update though, you can always check manually on your device.

The Lollipop update brings a new UI as well as other new features and performance optimizations. As usual it’s advisable to download and install the update over a reliable WiFi connection. When you receive this update for the One M7 Dual SIM, One E8 or Desire Eye do let us know in the comments box, as we’re always interested to hear what reader think about new OS updates.