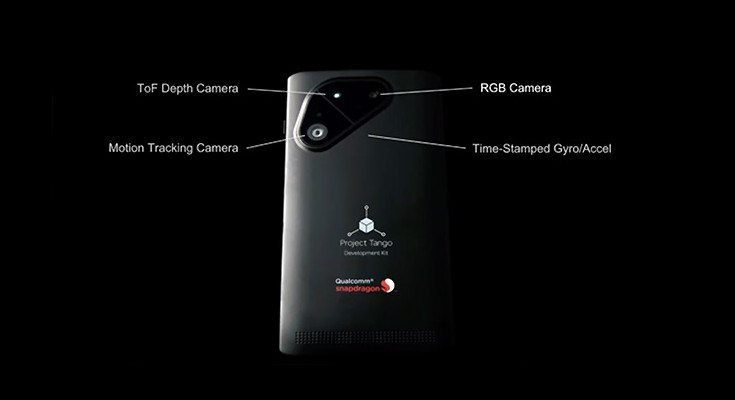 Just a few days ago we told you about how the Project Tango tablet was finally going on sale to the masses. Apparently, Google had another device in the works with a Project Tango phone, which is a smaller version of its environment sensing cameras.

As with the Tango tab, the Project Tango phone is a device geared towards developers and is not a consumer product at the moment. It’s also not the first time the devices have popped up, but when they launch it will be the first time they will be widely available to developers.

In terms of the specs, little is known about the Project Tango phone at this time. Qualcomm will be behind the processor as it will feature a Snapdragon 810, and 3-4GB of RAM is probably a lock as well. The sensor setup shown on the back of the handset features three cameras in a cluster with a ToF Depth camera, Motion Tracking camera, and RGB camera. There’s also a Time-Stamped Gyro/Accelerometer inside, but everything else is up in the air.

Initially, we thought Tango might be a concept that would stay on the backburner for a while, but it looks like Google is going full speed ahead with their Project Tango phones and tablets. It remains to be seen when or if a consumer version of the devices will arrive or if the tech will eventually find it’s way into the Nexus lineup or other products.