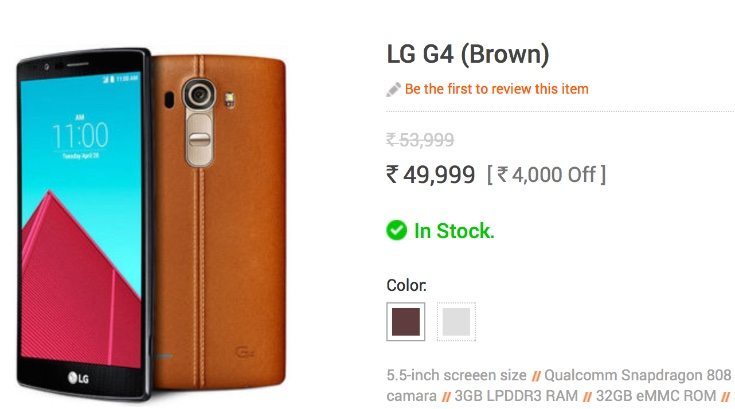 The LG G4 release is reaching more markets as we speak, and back in April we reported on the spot of a dual SIM version of the smartphone. There’s good news for those waiting for a dual SIM version of LG’s latest flagship, as the LG G4 Dual has just arrived for India. We have details of the LG G4 Dual price for India, and the phone is available now.

Previously the LG G4 Dual was expected to arrive in June for India at a price of Rs. 51,500. It’s only the first of the month, but we hear that the phone is already up for grabs at online retailer Infibeam with a price of Rs. 49,999. It’s also reported that retail stores are expected to be selling the phone from as early as today too.

The phone is up for sale online and in stock right now at Infibeam in the black or brown leather finishes, with the red color option to follow soon. Are you tempted to splash the cash to buy the LG G4 Dual? What are your thoughts on the pricing of this smartphone? We always appreciate hearing from readers so why not send us a comment.