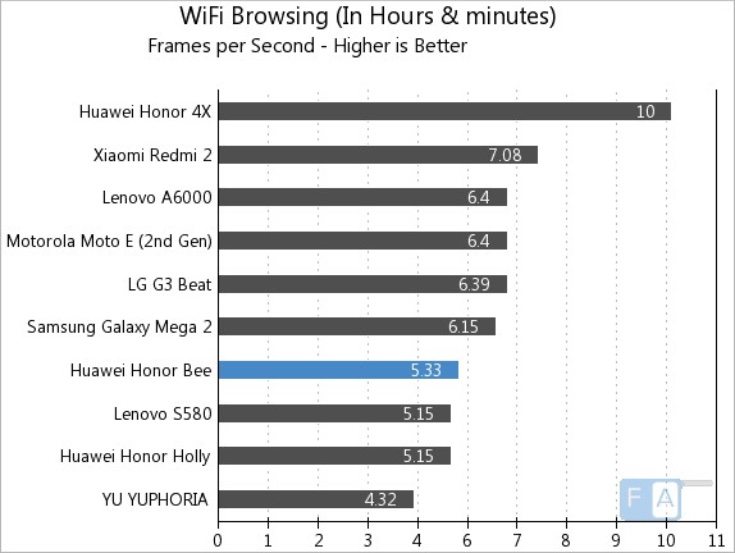 The Huawei Honor Bee is a recent release and is a very affordable low-end smartphone. Not everybody wants or needs a high-specced device so there’s definitely a market for this kind of budget handset. If battery performance is important to you when buying a new smartphone you might be interested in some testing showing Huawei Honor Bee battery life vs. other handsets such as the Xiaomi Redmi 2, Moto E 2nd gen, Yu Yuphoria and more.

Many of us are now heavy users of our mobile devices so battery life is an increasingly important factor to take into account before making your new smartphone purchase. Fone Arena has conducted battery life testing on the phone covering four different categories. These are Talk Time, 3G Browsing, WiFi Browsing, and Video Playback. For each category the results were then compared on charts with other reasonably priced handsets. Just a few of these are the Redmi 2, Moto E 2nd gen, Lenovo A6000, Yu Yuphoria, and Huawei Honor X.

Starting with Talk Time the Honor Bee managed a time of 9 hours and 5 minutes. In a chart showing the results for 10 different handsets (shown in the image directly below) that put the Honor Bee in ninth position. By comparison the Huawei Honor X, Moto E 2nd gen, and Acer Liquid E700 were in joint top spot with a time of 33 hours and 19 minutes. The Redmi 2 was in fifth place with 25 hours and 2 minutes while the Yu Yuphoria languished at the bottom with a result of 8 hours and 20 minutes. 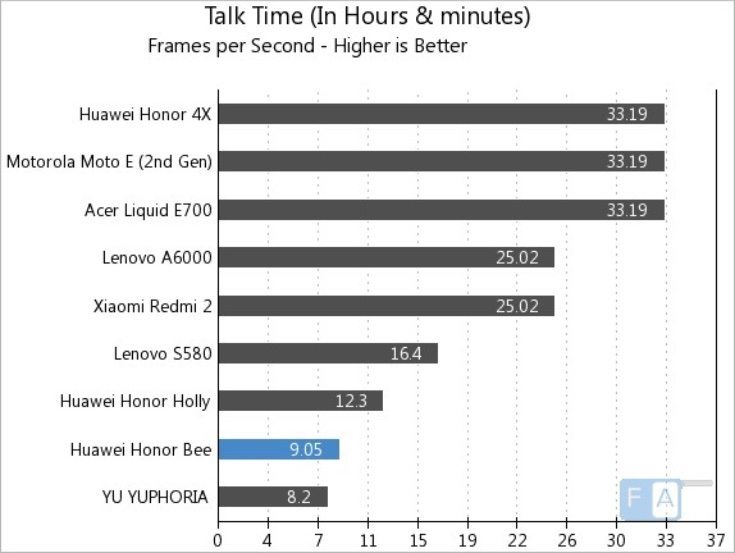 The next testing covered 3G Browsing and the Honor Bee attained a time of just 3 hours and 42 minutes, landing it in ninth spot again. The Huawei Honor X was in first place with 7 hours and 8 minutes, while the Moto E 2nd gen, Xolo Q2100, and Redmi 2 were in joint third spot on 5 hours and 33 minutes. Some may be surprised that the Yu Yuphoria attained the lowest result again, this time on 3 hours and 2 minutes.

The next category was WiFi Browsing (see image below) and this time the Honor Bee fared a little better. Its time of 5 hours and 33 minutes put it in seventh place while once again the Honor 4X was in top spot with 10 hours. The Redmi 2 came second with 7 hours and 8 minutes, while the Moto E 2nd gen took joint third spot with the Lenovo A6000, both on 6 hours and 40 minutes. Yet again the Yuphoria was at the bottom of the heap on only 4 hours and 32 minutes.

The final category is for Video Playback and the Huawei Honor Bee only managed a time of exactly 5 hours. That result put the Honor Bee in bottom position. By comparison the top spot was taken by the Huawei Honor 4X, which managed more than 16 hours. The Redmi 2 was third with a time of 10 hours while the Moto E 2nd gen was in seventh spot with 7 hours and 8 minutes. This time the Yu Yuphoria managed eighth place on a time of 6 hours and 40 minutes.

From these results we can see that the battery life performance of the Huawei Honor Bee is not very impressive at all, so if you are a heavy user of your smartphone it might be worth paying a little more for one of the other handsets mentioned or an alternative. However, if you are not a heavy user then the Honor Bee could still be worth considering. You can see the other tables as well as Fone Arena’s One Charge Rating for this phone at the source below.

Would you still consider purchasing the Huawei Honor Bee or have these battery life test results put you off buying this smartphone? If so, which handset might be your alternative choice? Do send us your comments about this.