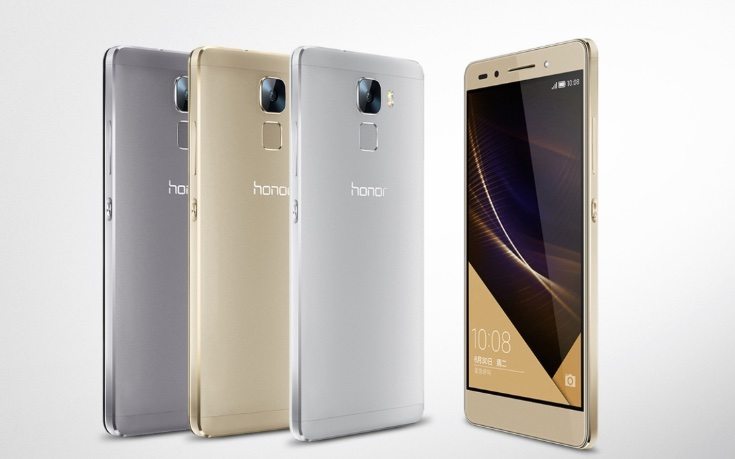 We knew it was coming, and today the Huawei Honor 7 has been officially announced. We have plenty of details ahead including specs and more, and also the Huawei Honor 7 prices that were revealed at launch. Fortunately the pricing is notably lower than a previous unofficial price indicator suggested.

We say prices rather than price because the Huawei Honor 7 will be available in three different variants of connectivity and storage. The base model has 16GB of internal storage and LTE, another version is a dual SIM dual-standby LTE handset, while the premium version moves up to 64GB of internal storage. The handset is attractive to look at and all of the models have metal alloy casing.

Common factors of all three versions include a Kirin 935 64-bit octa-core processor (four cores at 2.2GHz and four at 1.5GHz), Mali-T628 graphics, and a 5.2-inch display with Full HD resolution of 1920 x 1080 resulting in 423 ppi. There’s 3GB of RAM and microSD slot for storage expansion. It has a 3100 mAh battery with quick charging option, and the phone runs Android 5.0 Lollipop with Huawei’s EMUI version 3.1.

For camera capabilities the Huawei Honor 7 packs a 20-megapixel rear camera with phase detection autofocus, as well as an 8-megapixel front-facing snapper with wide-angle lens. The phone also features a fingerprint sensor below the rear camera that uses one touch rather than swipe. Connectivity options include LTE radio (bands dependant on region), GSM, WCDMA, WiFi 802.11 a/b/g/n/ac, Bluetooth 4.1, and A-GPS. The phone measures 143.2mm x 71.9mm x 8.5mm and weighs in at 157g.

Looking at what this phone has to offer in the way of specs, styling and price, there should be plenty of potential buyers for the Huawei Honor 7. Are you planning on making this your next smartphone purchase? Do let us know with your comments.