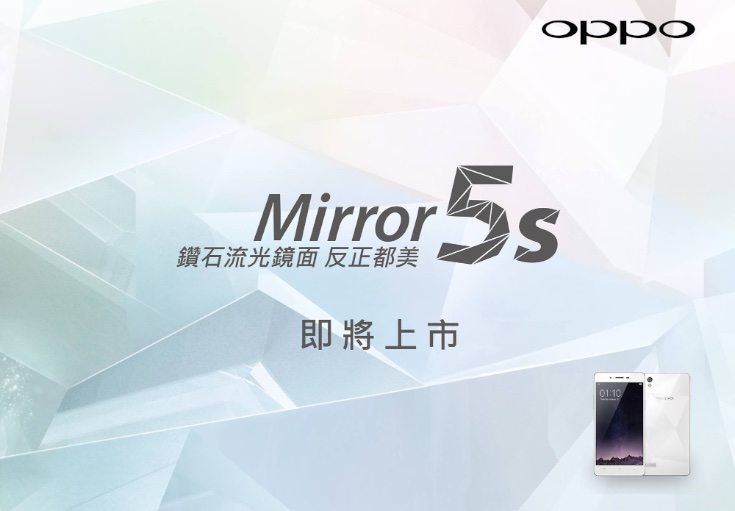 An Oppo Mirror 5s official teaser has just confirmed this upcoming smartphone. It shows that the Mirror 5s title rather than the Oppo Mirror 5 that it was earlier rumored to be called. While the teaser doesn’t give away too much, the small image of the handset shown does tally with an earlier leaked image. This phone is expected to be launched before too much longer.

Oppo Taiwan posted this tantalizer image on its official Facebook page, so at least we now know its proper name. It shows the phone to be coming soon, which ties in with rumors of an unveiling on July 5 although this is still to be confirmed. The Oppo Mirror 5s is likely to release in Taiwan first before reaching further markets in Asia. It might also release globally, as the company has been making some of its handsets available internationally.

Leaked specs so far for the Oppo Mirror 5s include a 1.2GHz Snapdragon 410 64-bit quad-core processor and a 5-inch display with HD resolution of 1280 x 720. There’s 2GB of RAM, and 16B of internal storage, with juice supplied by a 2420 mAh battery. Camera capabilities are said to be an 8-megapixel rear camera and 5-megapixel front-facing snapper.

The rear panel is thought to have a crystal cut design. The Oppo Mirror 5s will be a dual SIM smartphone and will release running Android 5.1 Lollipop with Oppo’s Color UI. We should remind you that the above specs have not yet been made official by Oppo so it’s still a case of wait and see. Although we expect the unveiling very soon, the release date is still up in the air.

What are your impressions of the mid-range Oppo Mirror 5s smartphone? Are you hoping that it releases in your region? Let us know by sending in your comments.