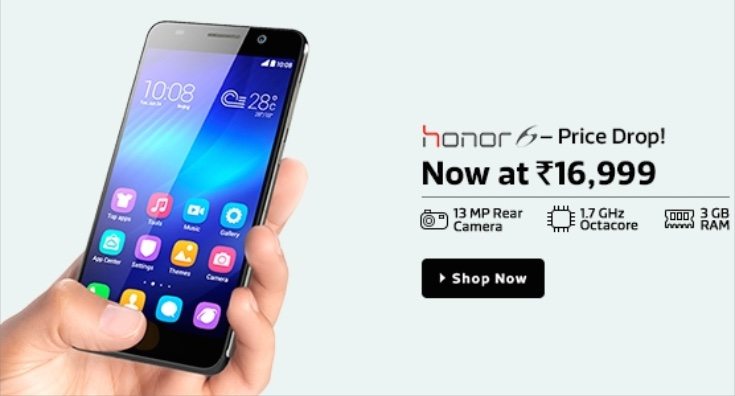 The Huawei Honor 7 was officially launched last week, and when a new smartphone arrives we often see prices reduced for older versions. That has now happened, as there is a Huawei Honor 6 India price slash that could prove tempting for some buyers.

The Huawei Honor 6 was announced in June last year and arrived for sale in India in September. When the phone launched in India it was priced at Rs. 19,999. Now Flipkart is offering the Honor 6 with a price tag of Rs. 16,999, and that’s a very decent saving of Rs. 3,000. The phone was first launched exclusively on Flipkart and is still sold online only through the giant retailer.

For the money you’ll get a dual SIM handset powered by a Hi Silicon Kirin 920 octa-core processor with Mali T628 graphics. The Huawei Honor 6 has a 5-inch display with Full HD resolution of 1920 x 1080 resulting in 445 ppi, 3GB of RAM, and 16GB of internal storage that can be expanded with microSD.

It has a 13-megapixel rear camera with BSI sensor, f/2.0 aperture and dual LED flash, as well as a 5-megapixel front-facing shooter. The Honor 6 is juiced with a 3100 mAh battery and connectivity is catered for with 3G, WiFi, Bluetooth, and GPS. It runs the Android 4.4.2 KitKat operating system with Huawei’s Emotion 2.3 UI. This handset is available in black and white color options.