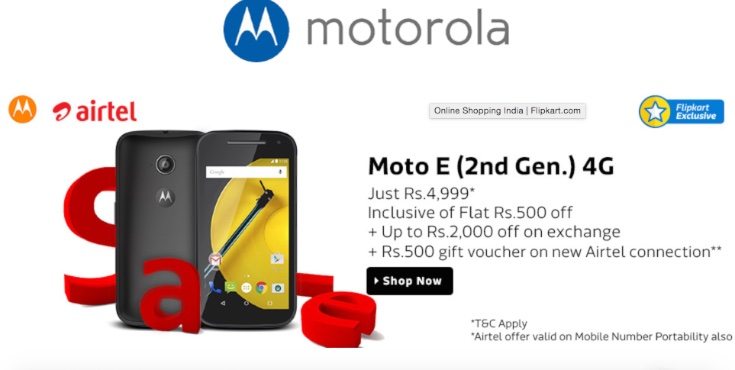 There’s no doubting that the Motorola Moto E 2nd gen has been extremely popular in India. This budget smartphone has a lot of appeal and comes in 3G or 4G LTE variants. They were both affordable already, and now the Moto E 2nd gen 3G and 4G have received India price cuts that make them even more attractive propositions.

The Motorola brand is well-liked in India, and although there are plenty of budget handsets available on the market, many buyers feel a loyalty towards Moto phones. We often see price reductions after time, and the company has slashed the price of the second generation Moto E 3G model to Rs. 5,999. Meanwhile the 4G Moto E 2nd gen is now down to Rs. 6,999.

If you purchase either at Flipkart the retailer is also offering an exchange deal for old smartphones. This could be worth up to Rs. 2,000 more off the price of the Moto E 2nd gen. As well as this, if you are an Airtel customer you can receive two months of double data on select recharge packs.

The new prices for the Moto E 2nd gen 3G and 4G means that they are both Rs. 1,000 cheaper than their earlier prices of Rs. 6,999 and Rs. 7,999 respectively. At this point we’re not clear whether these new price cuts are permanent or for a limited time. However, we do know that the Moto G 2nd gen recently had its price permanently dropped to Rs. 9,999.

If you can’t decide whether to take advantage of these price drops you might want to check out much more on the Motorola Moto E 2nd gen. You can head to our previous Moto E articles from this page. These include specs comparisons with other handsets such as the Yu Yuphoria, Micromax Canvas Spark, and more. Are you now tempted to buy the Moto E 2nd gen at these new lower prices?