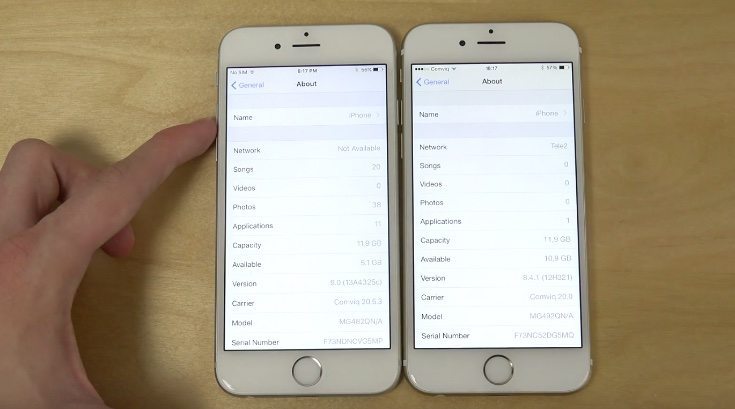 Apple seeded iOS 9 beta 5 to developers earlier this month and it can be good to see how different iOS versions compare on speeds. You might therefore be interested in checking out the iPhone 6 on iOS 9 beta 5 vs iOS 8.4.1 in some informal speed tests and more.

Previously we showed readers a bootup test between the iPhone 6 and iPhone 4S, both on iOS 9 beta 5. Unsurprisingly the iPhone 6 romped home a clear winner, although of course as it’s a beta build speeds for both could be further improved by the time of the final build and public iOS 9 release.

Now we’re sharing another YouTube video from Adrianisen, this time comparing two iPhone 6 units running different versions of iOS, both on the same WiFi. This way we’ll be able to see how much faster (or not) the latest beta of iO9 is. At the beginning of the video you’ll see both phones being simultaneously powered up. One is a little faster than the other, but there really isn’t too much in it.

It’s revealed that the marginal winner of the bootup speed test is in fact the iPhone 6 running iOS 9 beta 5, and the reviewer goes into Settings on each handset to show they are indeed running iOS 9 beta 5 and iOS 8.4.1. The video then goes on to show some further aspects of the different OS versions, such as some slight lag apparent when swiping down to the app search screen with iOS 9.

Next the App Store and other apps are opened up on both handsets to show which is faster than the other but we’re not going to spoil all of the suspense by telling you the results here! A Geekbench benchmark test is also conducted on both devices, and the resulting single-core and multi-core scores are very close. Finally some other minor differences between iOS 9 beta 5 and iOS 8.4.1 on the iPhone 6 are also shown.

As we mentioned earlier in this article, there are likely to be further changes and improvements with the final build of iOS 9. The upgraded mobile operating system is likely to make a public release just before the release of the iPhone 6 and 6S Plus at some point in September. Are you eager to start using iOS 9 on your iPhone, iPod touch, or iPad?